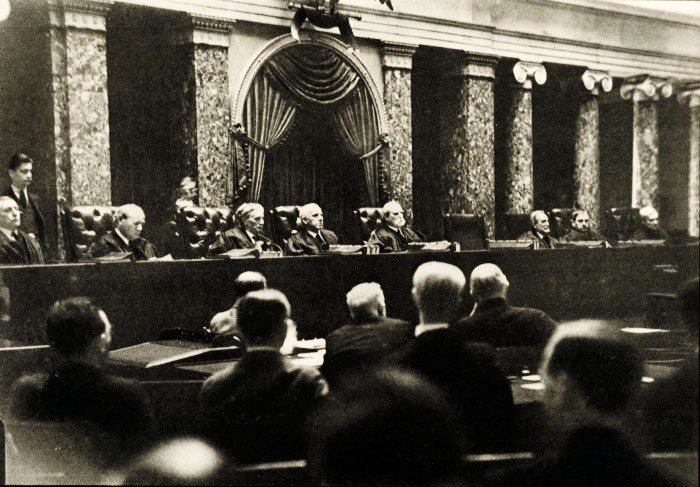 SCOTUS in the 1930s - not that much different now - First known photo of Supreme Court in session by Dr.Erich Salomon.

Saga Of The Nine Old Men – FDR And The Supreme Court In 1937 – Past Daily Reference Room.

SCOTUS in the 1930s – not that much different now – First known photo of Supreme Court in session by Dr.Erich Salomon.

With the latest storm of controversy over the “court packing issue”, here’s a reminder the concept rears its head every so often, going back to President Andrew Jackson.

The biggest incident took place in 1937 when President Roosevelt suggested expanding the Supreme Court by appointing an additional member of the court for every sitting member of court over age 70. In 1937 that would have meant six additional Supreme Court justices being appointed, raising the total number to 15.

Needless to say, the storm of controversy was swift and loud.  And even though there was no provision in the Constitution limiting the actual size of the Supreme Court, the fear that this was a political move on the Roosevelt Administration created a huge howl on the part of the Republicans who considered this a power grab on FDR’s part.

So on February 5, 1937 the process was underway. Here is that session of Congress and the arguments which took place.