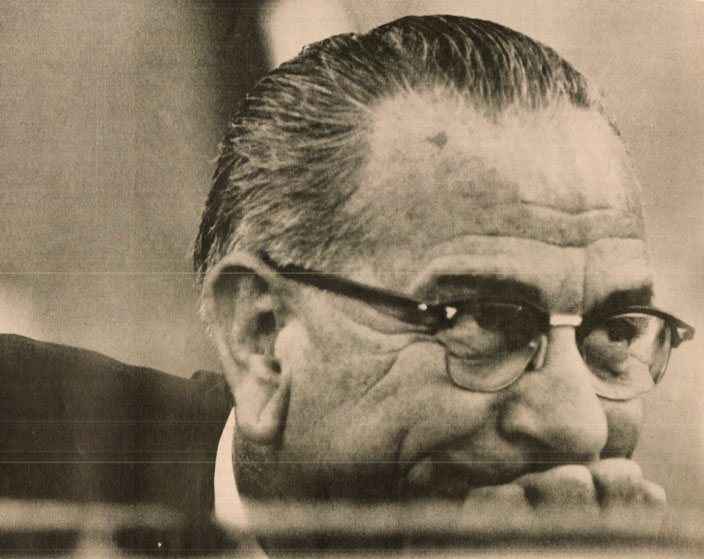 LBJ: A palpable sense the show would be over soon.

LBJ: A palpable sense the show would be over soon.

A Presidential Press Conference for this May 30th in 1968. President Johnson, mindful of his declaration in not seeking another term for the 1968 elections, was still confronted with the seemingly endless war in Vietnam. Joining him in this press conference were Gen.Westmoreland, who gave an assessment of what he thought was going on in Vietnam since the last Press Conference (and knowing now that the numbers of dead/wounded were inflated/deflated now make those assessments ironic) and Australian Prime Minister John Gordon who was paying a visit to the White House for a meeting regarding the situation in Vietnam.

The press conference was held at the Johnson Ranch in Texas and, after some preliminaries, the subject turned to Vietnam.

President Johnson: On March 31, in a speech to the Nation,3 I said that we would undertake a major unilateral act of de-escalation. We would lift the bombing from most of the territory and population of North Vietnam, including Hanoi and Haiphong, and we would free our hands so we could concentrate every resource at our command in the search for peace.

At that time I announced that I would not seek or accept the Presidential nomination.

I felt that these two steps might–just might–bring Hanoi to the conference table.

A month went by, but that has now happened, and these talks are being conducted in Paris.

I cannot report to the American people any substantive progress, nor can I even report that Hanoi has matched our restraint with theirs.

But if Hanoi will take responsive action, we are ready to go far and fast with them, and with others, to reduce the violence and to build a stable peace in Southeast Asia.

You get a sense Johnson was relieved to be dropping the White House burden at the end of the  year. Vietnam became his nadir.

As it did for just about everyone else.

Here is that news conference in full, as broadcast by NBC Radio on May 30, 1968.