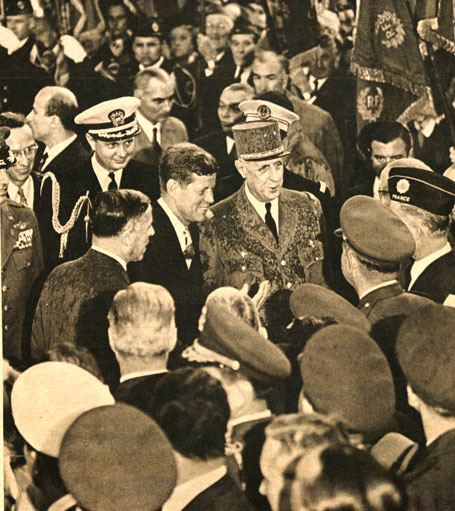 "A funny thing happened on the way to Vienna; Paris".

“A funny thing happened on the way to Vienna; Paris“.

On this May 30 in 1961, in what began during JFK‘s campaign as a promise to visit Paris and shore up sagging relations withFrench President DeGaulle, quickly became sidetracked when a proposed summit in Vienna with Nikita Khruschev was scheduled to happen around the same time. The French visit was crucial. The Vienna Summit was even more crucial because it signified a thawing in relations between East and West which had been badly damaged during the last year of the Eisenhower Administration over the infamous U-2 scandal. But America‘s NATO alliances were imperative. And so rather than cancel one for the other, Kennedy rolled them all (with a stop in London on the way back to Washington) into one visit.

The fear was, the Paris stop would be regarded by DeGaulle as a “flyover”, and diplomatically this was cringe-worthy. However, owing to the overwhelming charm of the young President and the First Lady, who was known for dazzling even the most malignant, fingers were crossed the visit would go unscathed.

It worked – but on this day, the Kennedys were about to step on the plane headed for Paris, so all was unknown at the time of this broadcast.

And so it went, this May 30th, 1961 – as reported on the first of a series of Special broadcasts by NBC Radio News on the Kennedy Visit to Europe.