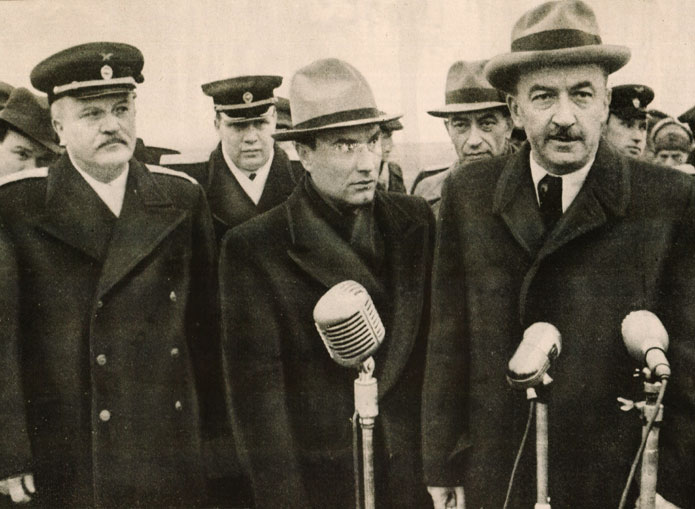 Deposed Hungarian President Ferenc Nagy (at Microphone) - subtle, not unlike a sledgehammer.

Deposed Hungarian President Ferenc Nagy (at Microphone) – subtle, not unlike a sledgehammer.

A day fairly overflowing with drama, but for different reasons and in different parts of Planet Earth for this last day of May in 1947. Starting with news that the democratically elected Premier of Hungary, Ferenc Nagy (Pronounced: Fairenz Nahhjjh) had been replaced in coup-like fashion by a figure more sympathetic to the causes of Moscow than Budapest, sent waves of Cold War fears throughout Western Europe. The honeymoon period was well over by 1947 and this latest turn of events in Eastern Europe gave credence to the Churchill statement months earlier that “an Iron Curtain” was descending over Eastern Europe. More events to come in the weeks and months ahead. The recent events probably explained the reasoning behind Truman’s signing of a $350 Million Foreign Relief bill, a portion of which was earmarked for Hungary. The Hearts-and-Minds/Popularity Contest was well underway.

Meanwhile, on the other side of the Atlantic, concern was spreading over the number of Commercial Plane crashes in previous days, with death tolls surpassing the total for the first five months of 1947 alone. The latest were two disasters within days of each other at a cost of some 174 lives. Despite that, there was no reported drop in airline bookings as the result of the disasters.

On another pessimistic note – the Agriculture Department predicted a return of drought and dust storm conditions for the Mid-West within five years if no sooner. And threat of a Soft Coal Workers strike was looming on July 1st, with talks breaking down between mine owners and John L. Lewis. Also, The Labor Department announced that any employer was free to discharge any employee thought to be a member of the Communist Party. The reign of Paranoia gets underway.

That, and a lot more news for this May 31st in 1947 as presented by ABC Radio’s News Of Tomorrow (from a partially damaged disc that clears up after a few minutes).