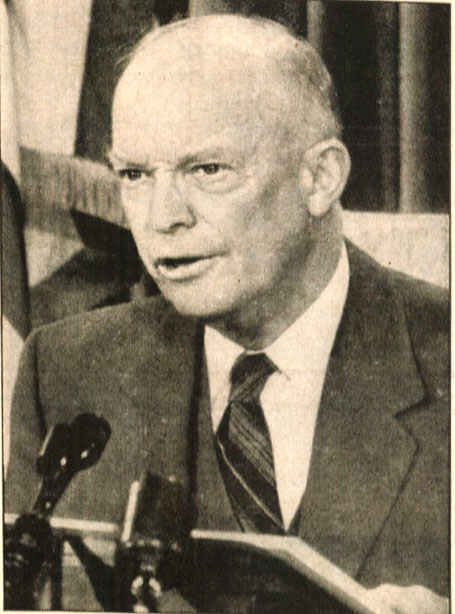 President Eisenhower - discussing a concept as foreign as Martian Land Rights these days.

The Right To Knowledge – Eisenhower Addresses Columbia University – May 31, 1954 – Past Daily Reference Room

President Eisenhower – discussing a concept as foreign as Martian Land Rights these days.

Maybe the Cold War had something to do with it. The Space Race and the dawn of New Technology, but in 1954 one of the things consistently stressed by President Eisenhower throughout much of his Presidency was the crucial role education played in our society. How Education and knowledge had a direct correlation between our system of an open society and one under a totalitarian regime.

It seems strange now – a college education for the vast majority of Americans seems almost impossible to achieve. Student loans, when available, have almost bankrupted an entire generation before they even got started. And even those with degrees, who have gone through the University system, are finding employment difficult at best. And worse, we are suffering from an overwhelming sense of being “dumbed down”, where an education is a thing of scorn and derision. Where ignorance is seen as something of a virtue, if our current state of Reality TV is any indication.

But in 1954 it was of key importance, and President Eisenhower was a strong advocate of grabbing as much education as possible:

President Eisenhower: “Thomas Jefferson, for one, at the end of his long life, preferred that posterity should think of him, not as the holder of high office, but for his relationship to the University of Virginia.

He held that the free flow of information was indispensable to the maintenance of liberty. He wrote that if he had to make a choice between a society without newspapers or newspapers without a government, he would prefer the latter. And, of the diffusion of knowledge among the people through schools, he said: “No other sure foundation can be devised for the preservation of freedom and of happiness.”

A relentless foe of tyranny in every guise, Jefferson throughout his life was steadfast to a fundamental tenet of Western Society, proclaimed two thousand years ago in the treasury of the Temple at Jerusalem, that the truth will make men free.

The pursuit of truth, its preservation and wide dissemination; the achievement of freedom, its defense and propagation; these purposes are woven into the American concept of education. The American university–neither the property of a favored class, nor an ivory tower where visionaries are sheltered from the test of practice–every American university fundamentally is dedicated to Columbia’s Bicentennial theme-“Man’s right to knowledge and the free use thereof.”

Those who chose the theme of this Bicentennial could not have found a more American one. I say this with apology to scholars of all countries, lest they think that I might be deliberately narrowing a universal principle to a provincial application. But from the very beginning of the Republic, education of the people, freedom for the people–these interdependent purposes have been the core of the American Dream.

Far from being fearful of ideas, the founders of the Republic feared only misguided efforts to suppress ideas”.

Here’s a reminder of how far we haven’t come. Of how far we’ve slipped.

President Eisenhower’s address, Man’s Right To Knowledge – given at Columbia University – May 31, 1954.