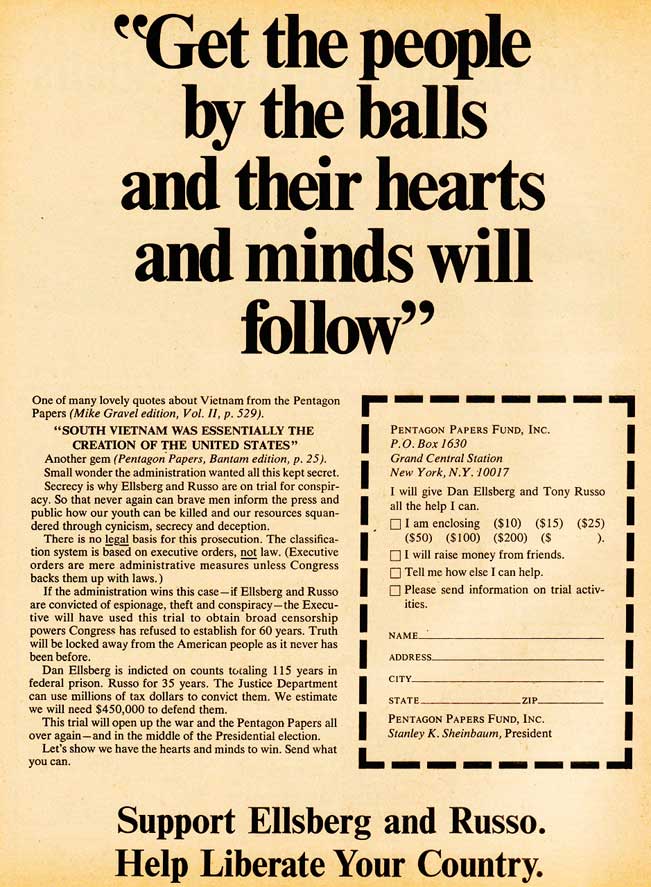 A universal sentiment from 1971 - pertinent, even today.

A universal sentiment from 1971 – pertinent, even today.

Before Edward Snowden and before Bradley Manning we had Daniel Ellsberg. A lot of comparisons to that pivotal point in our history have been made to Ellsberg of late. The release of the Pentagon Papers and their publishing in The Washington Post and The New York Times created an uproar only settled by the intervention of the Supreme Court, who ruled in favor of The Press. The decision was handed down on June 30, 1971 (something about June . . .) and the reactions were swift and far-reaching. Ellsberg was facing an estimated 115 years in Federal prison for his actions, but the public outcry was huge. What we had already suspected with respect to the War in Vietnam was now made abundantly clear and there was now the shocking and sad proof.

I have often thought of this as one of the initial episodes in what became Americas great National Nervous Breakdown of the 1970’s, one which we’ve never really recovered from. First we had Daniel Ellsberg, and the fallout from that. The realization that the Nixon White house was no bed of roses, and that Nixon was, in fact, a crook. That somehow the entire fabric of our national psyche became moth-ridden – things were just not what we were led to believe they were for a very long time – we had been, as a nation, lied to.

Bitter realities to consider then, for sure.

But on the occasion of the Supreme Court decision, the media went into overtime sifting, asking, contemplating and arguing.

And here is one of those discussions which took place on the day of that decision. With a group consisting of Ben Bradlee of The Washington Post, Deputy Under-Secretary of State William B. Macomber. Senator Henry Jackson and Max Frankel of The New York Times. The panel is moderated by Edwin Newman.

Listen to this discussion and substitute names and situations – they don’t really feel all that different.

The deceit and the violation are the same – perhaps more sinister this time.