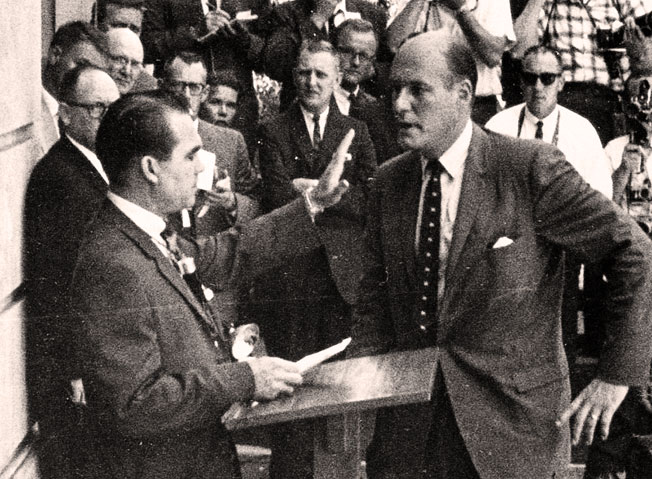 We could use a bit of love at the moment: Become a Patron!

On June 11, 1963, the Civil Rights struggle had gathered steam, but it was still a struggle with bitter and violent opposition every step of the way. On this day in 1963, the infamous showdown between Deputy Attorney General Nicholas Katzenbach and Alabama Governor George Wallace typified just how deep and visible the resistance was to change.

The issue was over the integration of Alabama schools and the defying of a Federal mandate ordering their integration and upholding the Supreme Court ruling of 1954.

President Kennedy: “Today, we are committed to a worldwide struggle to promote and protect the rights of all who wish to be free. And when Americans are sent to Vietnam or West Berlin, we do not ask for whites only. It ought to be possible, therefore, for American students of any color to attend any public institution they select without having to be backed up by troops. It ought to to be possible for American consumers of any color to receive equal service in places of public accommodation, such as hotels and restaurants and theaters and retail stores, without being forced to resort to demonstrations in the street, and it ought to be possible for American citizens of any color to register and to vote in a free election without interference or fear of reprisal. It ought to to be possible, in short, for every American to enjoy the privileges of being American without regard to his race or his color. In short, every American ought to have the right to be treated as he would wish to be treated, as one would wish his children to be treated. But this is not the case.

This is not a sectional issue. Difficulties over segregation and discrimination exist in every city, in every State of the Union, producing in many cities a rising tide of discontent that threatens the public safety. Nor is this a partisan issue. In a time of domestic crisis men of good will and generosity should be able to unite regardless of party or politics. This is not even a legal or legislative issue alone. It is better to settle these matters in the courts than on the streets, and new laws are needed at every level, but law alone cannot make men see right. We are confronted primarily with a moral issue. It is as old as the Scriptures and is as clear as the American Constitution.

Here is an extended excerpt of President Kennedy‘s address on School integration and the situation in Alabama and a re-cap of the days activities on the confrontation between George Wallace and Nicholas Katzenbach on the steps of the University of Alabama as narrated by Richard C. Hottelet of CBS Radio News.

Not that long ago.