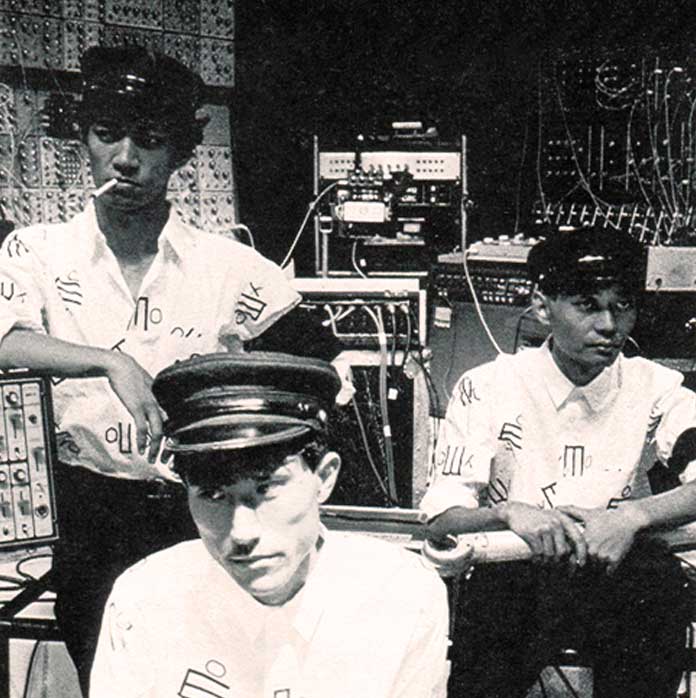 Yellow Magic Orchestra - safe to say they started most of it, if not all of it.

Yellow Magic Orchestra – safe to say they started most of it, if not all of it.

One of the most popular and influential bands of the Techno era of the 1980s was a trio from Japan known as The Yellow Magic Orchestra, or YMO for short. Having blazed a trail for electro-Pop, J-Pop, and Hip-Hop during their initial phase, YMO went on to become an important International touchstone in the world of Electronic Music.

Solid State Survivor, released in 1979, was YMO’s pinnacle recording in Japan, winning the 1980 Best Album Award in the Japan Record Awards. It featured English lyrics by Chris Mosdell, whose sci-fi themes often depicted a human condition alienated by dystopic futures, much like the emerging cyberpunk movement in fiction at that time. One of the album’s major singles, and one of the band’s biggest international hits, was “Behind the Mask”, which YMO had first produced in 1978 for a Seiko quartz wristwatch commercial, and then for Solid State Survivor with lyrics penned by Chris Mosdell. The song was later revised by Michael Jackson, who added new lyrics and had intended to include it in his album Thriller. Despite the approval of songwriter Sakamoto and lyricist Chris Mosdell, it was eventually removed from the album due to legal issues with YMO’s management. Jackson’s version was never released until his first posthumous album, Michael, though his additional lyrics were included in later cover versions of the song by Greg Phillinganes, Eric Clapton, and Ryuichi Sakamoto himself in his 1986 solo release Media Bahn Live. Solid State Survivor included several early computerized synth rock songs, including a mechanized cover version of “Day Tripper” by the Beatles.

Their second album Solid State Survivor went on to sell over 2 million records worldwide. By 1980, YMO had become the most popular group in Japan, where they were performing to sold-out crowds. Their first live album Public Pressure set a record in Japan, topping the charts and selling 250,000 copies within two weeks, while their next studio album X∞Multiplies had 200,000 pre-orders before release. The same year, their albums Solid State Survivor and X∞Multiplies held the top two spots on the Oricon charts for seven consecutive weeks, making YMO the only band in Japanese chart history to achieve this feat.

Here is a concert featuring YMO, recorded at The Hammersmith Odeon in 1980, just prior to their massive worldwide success.

I understand they’ve never officially broken up, rather gone on hiatus and pursued solo careers – so rumors about a new lineup and a possible tour are rife. But in the meantime, have a listen to the band just as they were in the process of taking off and the enthusiastic response from the  audience.

Recorded by the venerable BBC. All you have to do is crank it up.