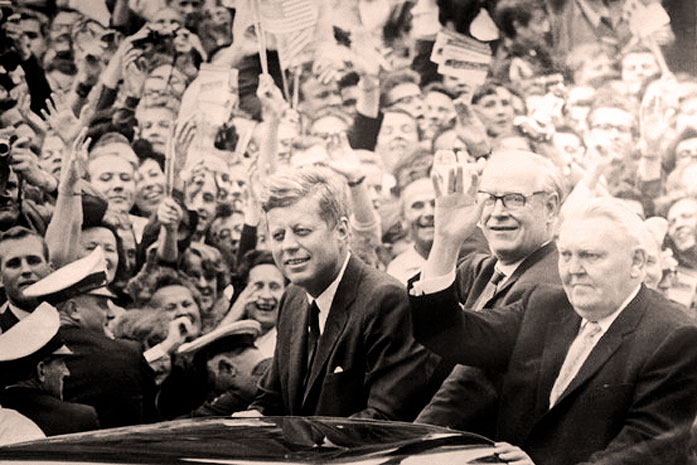 JFK arrives in Frankfurt - and with him, optimism.

JFK arrives in Frankfurt – and with him, optimism.

Click on the link here for Audio Player: Pres. Kennedy Address to the Assembly Hall at Paulskirche, Frankfurt – June 25, 1963

Despite the news of this day today, news for this day in 1963 was upbeat and optimistic in the midst of a Cold War. President Kennedy, during his historic visit to Germany, which gave us the great “Ich bin ein Berliner” address in Berlin on the 26th, gave something of a warm-up speech to the Assembly in Frankfurt a day earlier.

Pres. Kennedy: “We must not return to the 1930’s when we exported to each other our own stagnation. We must not return to the discredited view that trade favors some nations at the expense of others. Let no one think that the United States–with only a fraction of its economy dependent on trade and only a small part of that with Western Europe–is seeking trade expansion in order to dump our goods on this continent. Trade expansion will help us all. The experience of the Common Market–like the experience of the German Zollverein–shows an increased rise in business activity and general prosperity resulting for all participants in such trade agreements, with no member profiting at the expense of another. As they say on my own Cape Cod, a rising tide lifts all the boats. And a partnership, by definition, serves both partners, without domination or unfair advantage. Together we have been partners in adversity–let us also be partners in prosperity”.

Probably less well-known than his iconic Berlin address, it nonetheless was part of a memorable visit which continued to cement cordial relations with an important NATO ally.

Here is that entire speech from Frankfurt, as delivered in the Assembly Hall at Paulskirche on June 25, 1963, in stunning sound.