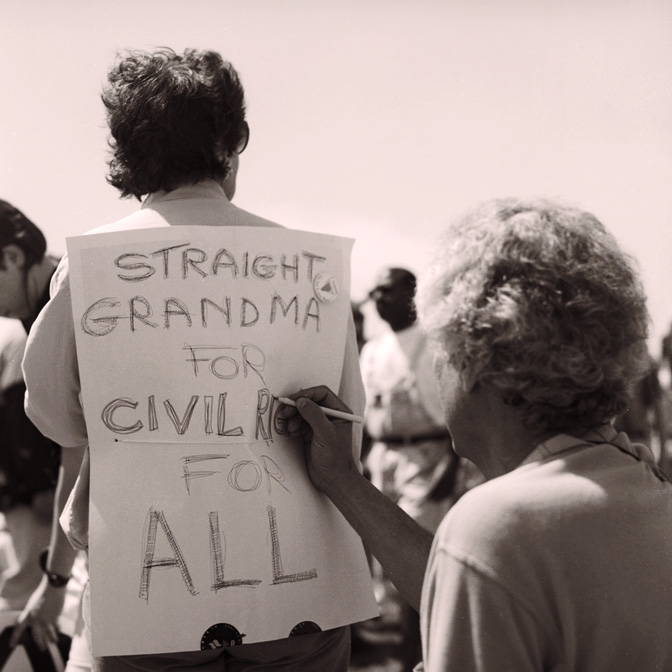 Twenty years ago Gay Marriage was a far-off distant dream.

Twenty years ago Gay Marriage was a far-off distant dream.

With emotions running with roller-coaster-like velocity the past 24 hours, The Supreme Court ruled today that DOMA was no longer an issue. That was the good news. Because hot on the heels of that ruling was the one the previous day which gutted a key provision in the Civil Rights Act of 1965.

A curious set of circumstances all around. If I am to figure this correctly – if you are Black and Gay and living in the South, you can get married, but there’s a chance you may not be able to vote. Strange set of rules, this country instills.

As a reminder that struggles are hard fought and go on seemingly forever, I thought I would run this milestone demonstration in the name of Gay Rights which took place twenty years ago this past April. The March on Washington, with an estimated 1 million demonstrators calling for an end to “Don’t Ask, Don’t Tell” and an end to discrimination of Gays, Lesbians, Bisexuals, transgender – everybody not labeled “straight”. Far back on the list of “wants” was the issue of Gay Marriage and the rights of a same-sex domestic partnership – it was a nice idea allright, and the fact that it was banned in most areas of the country seemed like another slice of strange we’ve come to expect here in America. I mean, where do we get off legislating morality? Isn’t that one of those “between you and your god” type things? Sort of like reproductive rights, the right to choose, the sudden interest on the parts of the self-appointed guardians of our society to dictate what goes on inside the average Vagina, for example? How most of those intent on issuing edicts don’t have one, and by the sounds of it, have never actually seen one.

I wonder about us sometimes.

So on the one hand, I am relieved a certain degree of common sense has descended on SCOTUS, that legislating whom you choose to love and spend the rest of your life with isn’t really any of Capitol Hill‘s business. But on the other hand, I am concerned that common sense hasn’t extended to the area of race – and that those struggles which went on for decades before this may be heading back to Square One all over again.

Relieved, but with that unmistakeable sickness in the pit of my stomach.

But as a reminder of the milestone achieved today, a one-hour extract from the complete broadcast day by the venerable Pacifica Network of that March on Washington, April 25, 1993.