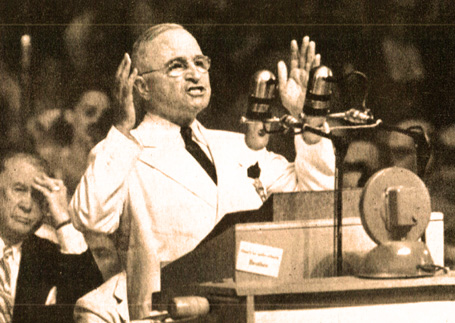 Coming up with a plan to make Foreign Aid do something.

Coming up with a plan to make Foreign Aid actually do something.

On this day in 1950, President Truman introduced an idea that, had it not been mired in the outbreak of the Korean War only a few days earlier, and partisan politics of the day, would have been a remarkable success in promoting a more stable world economy. Point 4 was a program designed to aid , not only those countries devastated by war, but also newly independent from former colonial rule. It sought to give practical and economic aid in developing successful economies in those distressed countries, and in turn promoting trade which would have had lasting positive results for all concerned.

President Truman: “Point 4 is not now–and should not become–a matter for partisan differences of opinion. However, some critics have attempted to ridicule point 4 as a “do-good” measure; others have said it is a waste of money. This is the most foolish kind of shortsightedness. If we fail to carry out a vigorous point 4 program we run the risk of losing to communism, by default, hundreds of millions of people who now look to us for help in their struggle against hunger and despair.

What we want to do is to teach these people how to help themselves. Point 4 is a successor to the old colonialism idea, the exploiting idea of the middle 17th, 18th, and 19th centuries. We want to have a prosperous world that will be interested in buying the immense amount of surplus things that we are going to have for sale. In order to do that, they have got to have something to give back to us, in order that they can buy our goods. I want to keep this factory organization of ours going at full tilt, and in order to do that, we must help these people to help themselves.

Point 4 is an investment in a peaceful and prosperous world. It is a program which will bring increasing results over the years. It will bring about a chain reaction in economic development. It will serve to create economic health where poverty existed, and to equip the people of underdeveloped areas to carry forward their economic gains and preserve their independence.”

Certainly, in the Cold War atmosphere of post-World War 2, the notion of Point 4 being something of a “winning of hearts and minds” program entered into the equation, but it was more importantly a step in creating some sort of stability in a world growing increasingly uneasy, while flexing its muscles of independence.

When the Eisenhower Administration took office in 1952, Point 4 was stripped of its title and much of its original proposals were either gutted or rendered moot and reorganized into the Foreign Operations Administration.

Here is that address by President Truman, given at the annual convention of the Newspaper Guild, on June 28 1950.