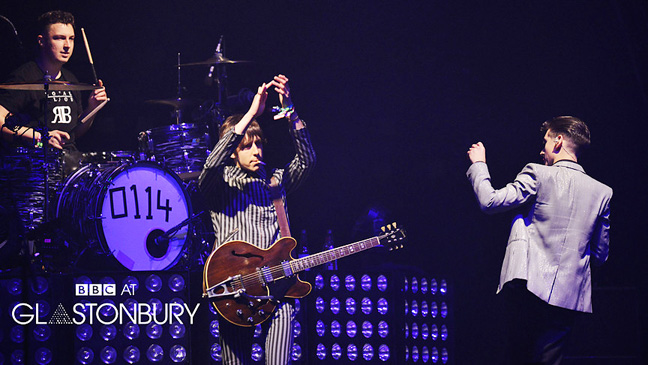 So far, Glastonbury 2013 has been a howling success. Touted as the first all-Digital presentation by the BBC, it’s purported to be wall-to-wall music. I’m not so sure that applies to us interested parties in Los Angeles, but it’s a blow-out for the folks at home, particularly with the infamous English weather and those drenching rains we always read about. I suspect full-Stateside access is predicated on contract negotiations and rights clearances. One day that may be different, but for now . . .

Still, it’s a pretty impressive festival, they’ve got going on. One DJ on the BBC remarked that walking from one end of the festival to the other was around 12 miles. And with 53 stages, it was pretty easy to get completely bogged down in sound.

But with all that going on, it’s all about the headliners and how they are going down with the audience.

The first night headliners were Arctic Monkeys. And by all reports did an amazing job.

If you missed it (and if you live on this side of the Atlantic, no doubt you did), here is the complete set from Arctic Monkeys as performed Friday night. Look at it this way, you get to miss out on standing in a crowd with a half-million other people, getting rained on, dodging drunks and waking up frozen with a hangover and with someone you have no idea who they are.

I know, next year you want to go.