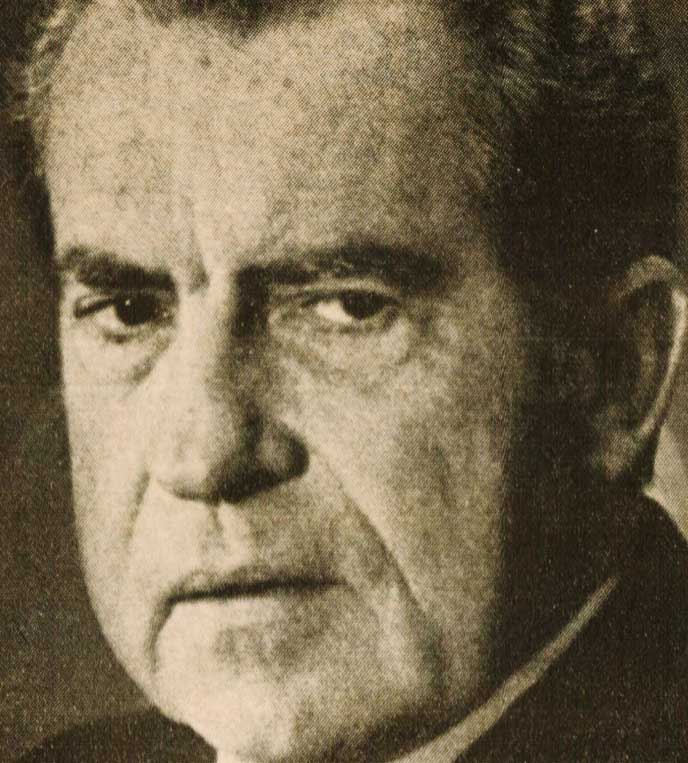 Portrait of Man in Headlights.

Portrait of Man in Headlights.

Busy week, this particular one in July 1974. Surprise results from elections in Canada, uneasy ceasefire staying along Israeli borders and that thing called Watergate that kept the country and much of the world glued to their TV’s and Radio’s.

The Watergate matter and the Impeachment proceedings of President Nixon took center stage with the week beginning at the Supreme Court, hearing arguments over whether or not a President can ignore requests to turn over evidence by a Special Prosecutor. The Special Prosecutor argued he could not, and the President’s counsel argued he could. The House got in there, with arguments that the court was intruding on the prerogatives of the House in matters of Impeachment. By the end of week SCOTUS was still deciding.

But a District court took away some of the attention by finding Presidential aide John Ehrlichman guilty of authorizing the Plumbers break-in of the office of Daniel Ellsberg‘s Psychiatrist. Three of the Plumbers, including Gordon Liddy were also found guilty. Ehrlichman promptly announced his intention to appeal, citing difficulty in finding a fair trial in Washington, hoping another trial could take place somewhere else.

And at the same time, The Senate Watergate Committee released a 2200 page report of their findings during the Committees 17 month investigation. No revelations to be had, but clear implication in a number of high places that wrongdoing had been taking place.

President Nixon escaped the heat by going to San Clemente. And the wheels of Impeachment rolled on.

Meanwhile, on the heels of the Nixon trip to Egypt, negotiators were flying to Cairo and Tel-Aviv with the hopes of hammering out some settlement. Hints that the Israeli’s were toying with the idea of recognizing the PLO as a political entity brought a cautious sigh, and the shaky ceasefire taking place had hopes inching up a few notches. The recognition came with the stipulation that the PLO recognize Israel as a sovereign State. The next day those hopes were tossed out while Israel indicated the ones they were doing the negotiating with were the Jordanians. Still, there were enough indications from other sectors that something was afoot and maybe a settlement this time would be reached.

In Canada, voting resulted in an upset victory for Pierre Elliot Trudeau and a winning of the majority of seats in Parliament for his Liberal Party and a firm mandate to govern for the next five years. It exceeded expectations and took everyone, including the voters, and even Trudeau by surprise.

And the week ended on a sad note via the Supreme Court – this time with word that former Supreme Court Justice Earl Warren had died at age 83. Earl Warren was an appointee of President Eisenhower and former three-term Governor of California as well as vice-Presidential candidate with Thomas Dewey in 1948. Warren was a pivotal figure in the legal milestones of the 1950s and 1960s. Portrayed by many as a “Legal Activist”, Warren was not timid about changing the law via Supreme Court decisions and his running thread through all those decisions was the concept of equality. He became an advocate for the underdog and came to be the target of a backlash by many arch-conservatives, spearheaded by none other than Richard Nixon, to turn back some of those landmark decisions.

And that’s how this week in July went in 1974, via The World This Week from CBS Radio.