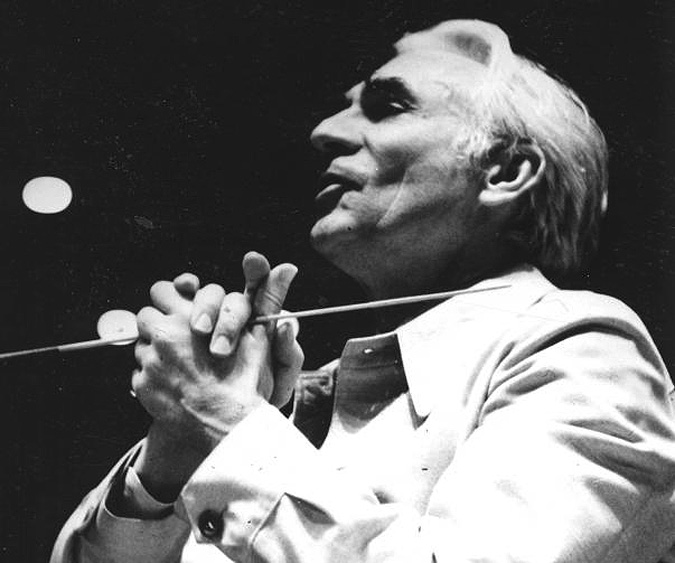 One of the legends of the Podium during the last half of the 20th Century.

Jean Martinon: One of the legends of the Podium during the last half of the 20th Century.

(Editors Note: This was Originally posted in 2013).

Anyone who has spent any time this past week surfing the various radio outlets around Europe knows this is festival season all over. This week Radio France Musique is in full festival mode with a number of special programs as well as live-and-direct broadcasts.

But the huge attraction of this massive outpouring of cultural riches is the month-long look at historic broadcasts by the old ORTF Orchestra under the direction of a number of celebrated musical figures, as well as some legendary soloists. This week they are running broadcasts by Jean Martinon and Sergiu Celibidache; two major names on the podium during the second half of the last century.

This week it’s a concert featuring Jean Martinon with legendary cellist Maurice Gendron in a concert broadcast from the Besancon Festival on September 12, 1969.

Maurice Gendron (26 December 1920 – 20 August 1990) was a French cellist, conductor and teacher. He is widely considered one of the greatest cellists of the 20th century. He was an Officer of the Legion of Honor and a recipient of the National Order of Merit.He was an active member of the French Resistance during World War II.

Gendron recorded most of the standard concerto repertoire with conductors such as Bernard Haitink, Raymond Leppard, and Pablo Casals (the only cellist to appear on a commercial recording under Casals’s baton), and with orchestras such as the Vienna State Opera Orchestra, the London Symphony Orchestra, and the London Philharmonic Orchestra. He also recorded the sonata repertoire with pianists such as Philippe Entremont and Jean Françaix. For 25 years he was a member of a celebrated piano trio with Yehudi and Hephzibah Menuhin. He also made a famous recording (earning an Edison Award) of J. S. Bach’s solo cello suites.

Gendron played with many musical stars of his time, including Benjamin Britten, Dinu Lipatti and Rudolf Serkin. The 18th-century Stradivarius he played, which has become known as the ex-Gendron cello, was subsequently on loan to German cellist Maria Kliegel.

Gendron taught at the Yehudi Menuhin School and at the Paris Conservatoire. His students include Colin Carr, Chu Yibing and Jacqueline du Pré. In 2013 a former student alleged that Gendron was abusive toward young students during his time at the Yehudi Menuhin School in the ’60s and ’70s. Richard Hillier, the headmaster at YMS, has said he is aware of the allegations but that according to school documents, no concerns were raised about Gendron’s behaviour. Other students of Gendron have described him as a very strict, even problematic teacher, but an influential one.

Gendron was the first modern cellist to record Boccherini’s Concerto in B-flat in its original form (he discovered the original manuscript in the Dresden State Library) instead of Grützmacher’s version. This recording has been widely acclaimed by critics and is considered a classic. He gave the first Western performance of Prokofiev’s Cello Concerto with the London Philharmonic Orchestra under Walter Susskind, and was subsequently given exclusive rights to the piece’s performance for 3 years.

3. Claude Debussy
Iberia , images for Orchestra No. 2
In the streets and roads
fragrances of the night
the morning of a holiday

The whole series, which is daily until mid-August, is via the INA Archive in Paris. I’ve heard about this archive and I’ve visited their website. It’s impressive and it features a wide array of cultural and social clips, audio and photos. You can spend weeks there just browsing. Believe me, I have.

At any rate, this is a special concert and a historic one. I hope to get more of these up in the coming weeks. They are not to be missed.