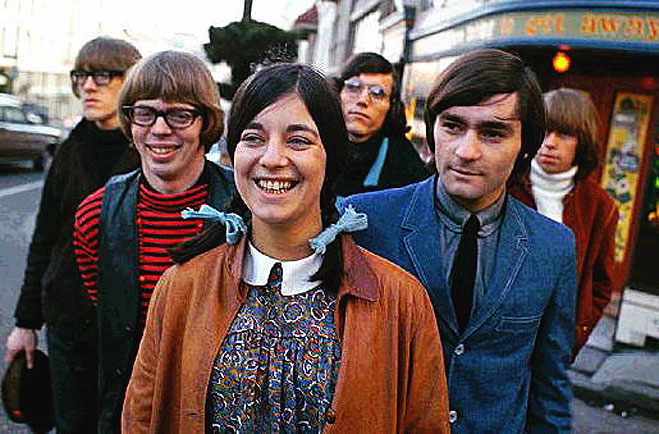 Jefferson Airplane: Folk-Rock ensemble will play at your next dance, prom or Birthday Party. Call now.

A bit of  Rock history tonight. In what was billed as the first Bill Graham production, a fund raiser for the San Francisco Mime Troupe on November 6, 1965 featuring, among others, The Jefferson Airplane.

As you will most likely notice by the picture above, the band looks mostly familiar, except for the lead singer. Signe Anderson was, for all intents and purposes, the original “face that launched a thousand trips” before Grace Slick entered the picture. Grace was otherwise occupied with another band, The Great Society, co-founded by then-husband Darby Slick. Signe was deeply influenced by the Folk scene and was a well-known singer around the local folk and Jazz clubs in the Bay Area. She departed the band in 1966, officially because of her pregnancy and expecting her first child. But the inside news was intense in-fighting between her and the band and the band’s complete dislike for Signe’s husband, who was a member of The Merry Pranksters. It’s all well-documented and makes for good reading, if you are remotely interested in that period in music history.

In any event, here is one of those early performances by the fledgling Jefferson Airplane before they rocketed to stardom. Sadly, only an eleven minute clip exists from what was most likely a much longer set and broadcast of the party.

The sound is so-so. Stereo, but it shows it’s age not too well. But as I always say with history – you have to take what you can get if it means not getting anything at all.