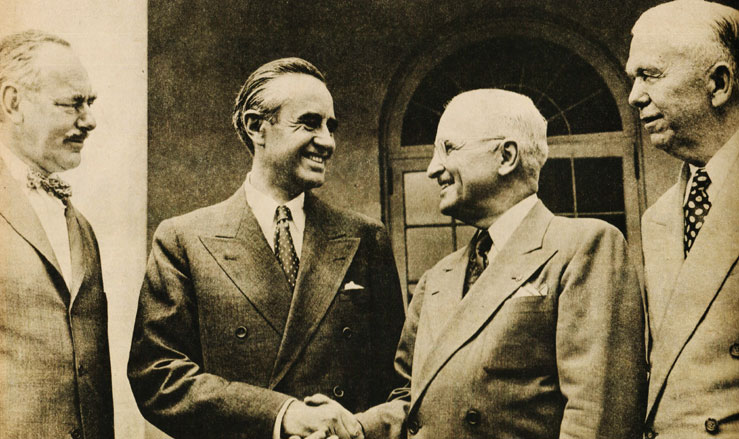 Acheson, Harriman, Truman and Marshall - a funny thing happened on the way to Tehran . . .battleships.

(L-R) Acheson, Harriman, Truman and Marshall – a funny thing happened on the way to Tehran . . .battleships.

No shortage of global or domestic hotspots, this August 2nd in 1951. Starting with news of intense squabbling between branches of the military escalating to the point a Congressional investigation was called for. The endless carping was cause for concern, especially in Korea where the Army was having trouble depending on the Air Force for fire support during crucial ground actions.

But the squabbling wasn’t confined to the Armed Forces – no compromise or settlement was reached in the latest truce talks in Korea. Seems the ceasefire zone was in dispute and no one could agree on where it was supposed to be.

And the question “how much do you like Ike” was being bandied around Washington, as speculation arose over a possible run for the White House from General Eisenhower. Aside from not deciding whether or not to run was the decision of what to run as – Democrat or Republican. Only Ike knew for sure and he wasn’t telling.

Speculation was also rife over whether or not Averell Harriman was going to replace Dean Acheson as Secretary of State. Harriman was on his way to Tehran to take part in talks regarding the Anglo-Iranian Oil dispute, which was taking on nerve-wracking proportions. Seems London decided it was a good time to stage  Naval maneuvers in the Persian Gulf and so several battleships and destroyers were spotted looking ominous outside Iranian waters.

Meanwhile. Influence Peddling was a hot topic on Capitol Hill this day, with the Bribery case of DNC Chairman William Boyle Jr. under scrutiny. Seems the Chairman was accused of accepting an $8,000 “love offering” in connection with an RFC loan.  And protests were launched in connection with an attempted land grab by a group headed by former Auto magnate E. L. Cord of offshore oil wells in the Gulf of Mexico off Louisiana.

And when all else fails, look for Communists. The HUAC Hearings continued.

So much for life on Planet Earth for August 2nd, 1951 – all that an a lot more as reported by Don Hollenbeck, substituting for Edward R. Murrow and The News from CBS Radio.

BY THE WAY – please make a donation to keep Past Daily alive and breathing. Make your secure and anonymous donation here: Past Daily Summer Fundraiser. You will have saved a lot of lives in the process.