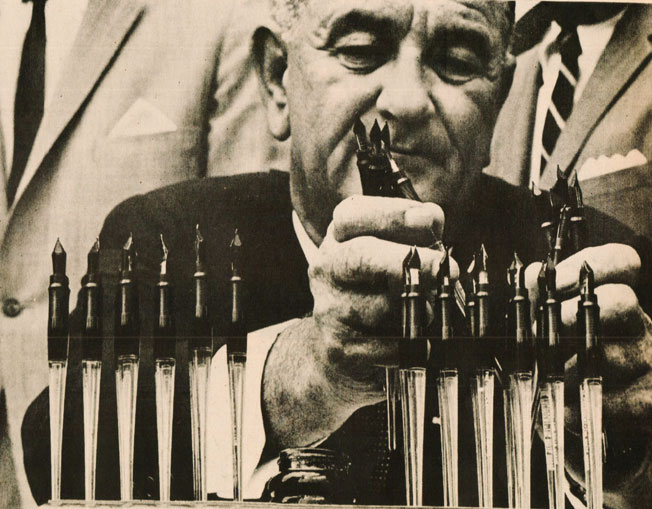 And with a few deft strokes of a pen, lives were changed.

Slipping Into Darkness – The Gulf Of Tonkin Resolution – August 10, 1964

And with a few deft strokes of a pen, lives were changed.

Fifty years ago this week, the seemingly innocuous event of signing a bill pledging support of the South Vietnamese government from  further intrusions by the North wound up changing a lot of peoples lives forever.

Over what has later been labeled as falsified claims of an attack by North Vietnamese Patrol boats of U.S. ships in the Gulf of Tonkin, escalated into what would soon become a full-on shooting war, with U.S. service personnel no longer considered “advisers” but an active troop buildup that would eventually result in the loss of some 58,000 American lives and countless North and South Vietnamese.

And on August 10th of 1964, President Johnson signed the bill that got it all started. Surprisingly (but not at the time), passage of the Resolution was a shoe-in, with only 2 votes against our further intrusions into Southeast Asia.

Here is the signing of that bill, as it happened on August 10th 1964. The broadcast begins with one of the many “features” during the broadcast day – an episode of Emphasis, with a description of the typical Pharmacy in Rome and then switches live to Washington for the signing ceremony.

How something so simple could wind up being so profound speaks volumes about how history actually happens.