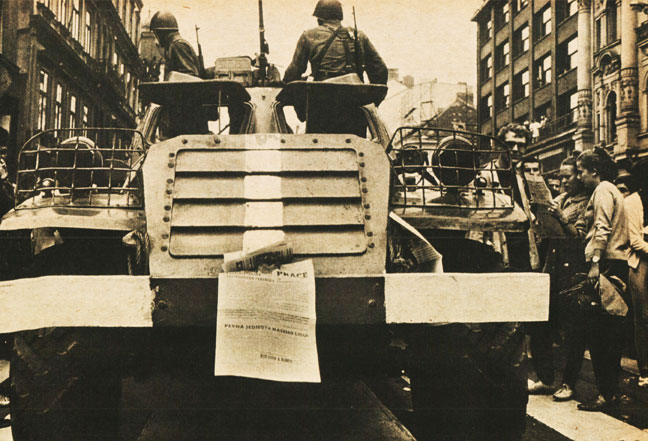 Further evidence that August is a month for upheavals. On the 20th of August in 1968, during the early morning hours, residents in Prague and outlying areas were awakened to the sound of rumbling tanks and squadrons of MIGs. In one swift move, Moscow decided Prague Spring and Socialism With A Human Face had done enough and it was time to restore hard-line Soviet influence in Czechoslovakia.

So, in addition to Moscow, troops from other Soviet Bloc countries joined in and the country was quickly overrun and the shockwaves reverberated throughout the world within hours.

At approximately 11 pm on 20 August 1968, Eastern Bloc armies from four Warsaw Pact countries – the Soviet Union, Bulgaria, Poland and Hungary – invaded Czechoslovakia. That night, 250,000 Warsaw Pact troops and 2,000 tanks entered the country. The total number of invading troops eventually reached 500,000. Romania did not take part in the invasion, nor did Albania, which subsequently withdrew from the Warsaw Pact over the matter. The participation of the German Democratic Republic was cancelled just hours before the invasion. The decision for the non-participation of the East German Army in the invasion was made on short notice by Brezhnev following requests by high-ranking Czechoslovak opponents of Dubcek who feared much larger Czechoslovak resistance if German troops were present on Czechoslovak territory, due to previous Czech experience with the German occupation of Czechoslovakia.

The invasion was well planned and coordinated; simultaneously with the border crossing by ground forces, a Soviet airborne division (VDV) captured Prague Václav Havel Airport (at the time called Ruzyne International Airport) in the early hours of the invasion. It began with a special flight from Moscow which carried more than 100 plain clothes agents. They quickly secured the airport and prepared the way for the huge forthcoming airlift, in which An-12 transport aircraft began arriving and unloading Soviet airborne troops equipped with artillery and light tanks.

As the operation at the airport continued, columns of tanks and motorized rifle troops headed toward Prague and other major centers, meeting no resistance. The bulk of the invading forces were from the Soviet Union supported by other countries from the communist bloc. Among them were 28,000 troops[60] of the Polish 2nd Army from the Silesian Military District, commanded by general Florian Siwicki, and all invading Hungarian troops were withdrawn by 31 October.

During the attack of the Warsaw Pact armies, 137 Czechs and Slovaks were killed (19 of those in Slovakia)and hundreds were wounded. Alexander Dubček called upon his people not to resist. He was arrested and taken to Moscow along with several of his colleagues. Dubček and most of the reformers were returned to Prague on 27 August, and Dubček retained his post as the party’s first secretary until he was forced to resign in April 1969 following the Czechoslovak Hockey Riots.

The invasion was followed by a wave of emigration, largely of highly qualified people, unseen before and stopped shortly after (estimate: 70,000 immediately, 300,000 in total). Western countries allowed these people to immigrate without complications.

With 1968 already a year bathed in violence and protest, this new episode just added to the jitters the world was undergoing. How the year was going to end up was anybody’s guess. And the guesses weren’t optimistic.

Here is the first hour of bulletins as they were broadcast from around 10:00pm (PDT) on August 20th via CBS Radio and their (relatively) new Netalert service.

Scary times – and no wonder people were tuning out at an increasing rate. Reality was becoming too hard to handle.