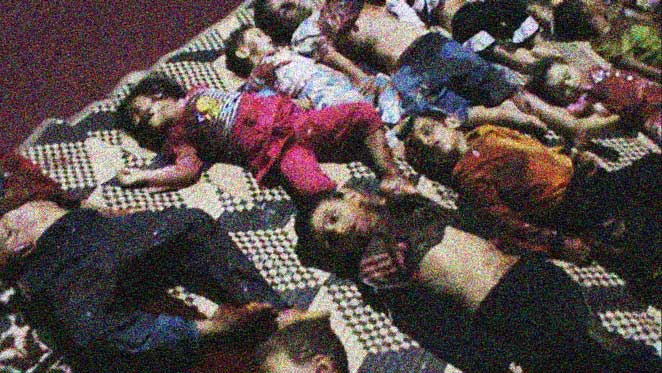 The question is; Who did what, with which, to whom?

The question is; Who did what, with which, to whom?

How do we know exactly what’s going on in Syria right now? We don’t. Who do we believe? We can’t. Can we believe anything anyone is saying? Not really. What about the pictures of the dead, the gassed, the chilren? We don’t know for sure who did it. From what we’re being told, all signs point to the Assad regime and the atrocities which went on some days ago. But, as has been said over and over again throughout the rest of the world, there is no conclusive proof the government staged the attack. Are we looking at a repeat of the WMD argument in 2003? We don’t know.

One thing is for certain, support for U.S. involvement, in fact just about any NATO involvement, is dwindling. As was pointed out hours ago, Parliament in the UK rejected a Cameron proposal for an air-strike against Syria. The United Nations is conjuring John Lennon by saying “Give Peace A Chance”. And no one knows for certain how it will all play out.

But, to be sure, mainstream Media is America is doing a rotten job of getting to the heart of the argument. Instead, for some time this week our media was overtaken by the purported outrage over a Pop-star’s approximations at prurience. As if we have no business being concerned with the events that will eventually involved all of us in some way. In this case, ignorance is no longer bliss. Ignorance is our downfall.

So, as a way of letting you know what is going on in other parts of this world, I have put together a series of newscasts and discussions regarding the events in Syria and how others are feeling about it.

The second player features news from Kol Israel, Polish Radio, CBC in Canada’s World Report, English news from Paris via Radio France International and the last is a discussion program via The Voice of Russia (obviously pro-Assad, but you get to know why). All of these reports were recorded earlier today. The news has undoubtedly changed in the past several hours. But the crisis is still the same.

I would urge you to go and dig out news from other sources, to get a better idea of what we may be getting ourselves in to. Times have changed – you can no longer sit back and wring your hands in despair while changing the channels.

History has a sad way of repeating itself over and over again – particularly when lessons aren’t learned. Hopefully enough light can be shed to change all that.