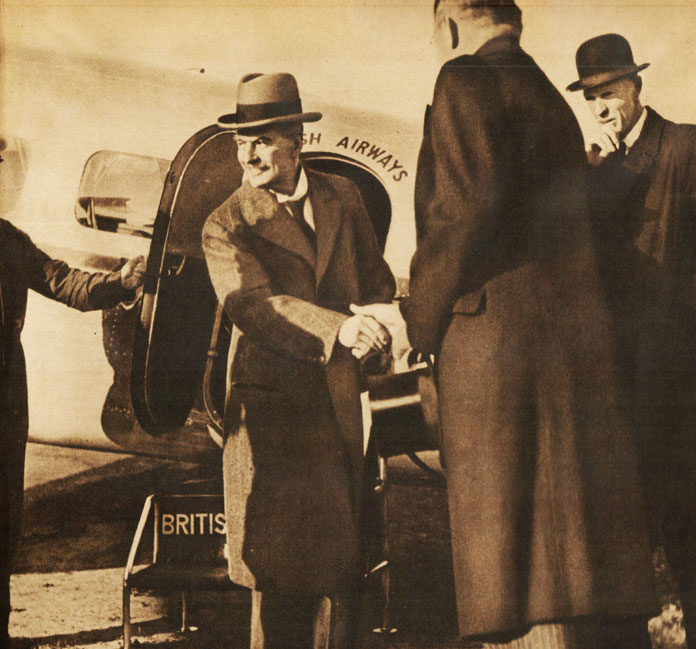 Click on the link here for Audio Player: News of the Crisis in Czechoslovakia NBC Blue Network – September 13, 1938

September it seems, is a crisis month in history.  On this September 13th in 1938, crisis was looming in Europe over a piece of disputed land belonging to Czechoslovakia, yet claiming to be part of Nazi Germany.

With a tenuous peace in Europe for a little under 20 years, this new flareup brought memories of 1914 to many. Disputes, squabbles and demands – and the end result being war.

And so this day in September of 1938 was about saber-rattling and the fears of a war looming, and the scramble to  negotiate a peaceful settlement in the brewing conflict.

An interesting point in history. First – the new use of the airplane as a means of bringing about Shuttle Diplomacy; something that was not around in 1914 (other than small bi-planes). And second – the first real use of radio as a means of transmitting information. It was The Munich Crisis (as this was to be called) that really brought about the birth of Radio News on a grand scale. The idea that a person in Los Angeles could be as informed as the person in Belgrade, at roughly the same time, was a fascinating technological leap. And it signaled a whole new way of communicating and, most likely, probably aided in ending the conflict quicker than it would have in 1914.

History unfolding, as it was presented by the Blue Network of NBC and by shortwave relays by the BBC on September 13, 1938. Starting off with a program at the time, a bulletin breaking into the program and the rest is history.