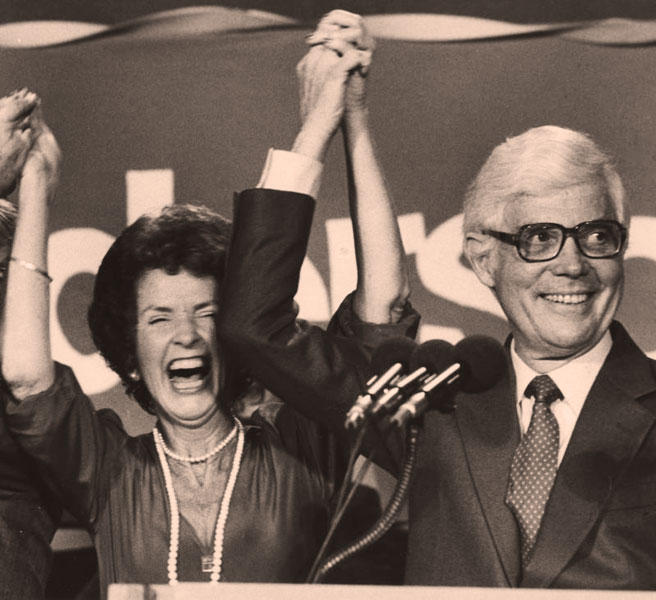 Upsetting the cozy apple cart of the Two-Party system in 1980.

John Anderson: Upsetting the cozy apple cart of the Two-Party system in 1980.

Hard to forget this week in September of 1980 was all about the Presidential Election campaign and the upcoming debates between Jimmy Carter, Ronald Reagan and that thorn in both of their sides, John Anderson.

Carter refused to participate in any debate that also included Anderson. Spokesman Robert Strauss explained that the debates were to be one-on-one, meaning only Carter and Reagan. So if the debate went ahead on September 21st, there would be an empty chair on stage in Baltimore that night. Everyone chimed in with their two-cents, including former President Gerald Ford, who never quite got over the stunning upset victory Carter won over Ford in 1976.

But the campaigning wasn’t the only thing going on in the world this week in 1980. On Capitol Hill, much huffing and posturing was taking place over the alleged eaking of information regarding the Stealth Bomber program. Senate Minority leader Howard Baker was quick to blame the Carter White House as the source of leaks and called for a full investigation over this divulging of secrets about our defense program.

And the Liberal Party of New York decided to endorse John Anderson for President, rather than Jimmy Carter. The Carter campaign shrugged the snub off.

And in true mud-slinging fashion, accusations of using the White House for political gain were leveled at Carter who said his campaign was using the White House to print up literature for use by the Carter camp.  And on the Reagan side – much controversy was stirred up over quotes regarding evolution used by both Reagan and running mate George Bush.

In one of the last of the primaries of the season, the Senate race in New York got a surprise with the win of Alfonse D’Amato over Jacob Javits. Javits wasn’t completely out of the race, as he also signed on with the Liberal Party of New York for another shot at winning in November. Also losing re-election in a 3-way Democratic Primary was Florida Congressman Richard Kelly who was a figure in the ABSCAM scandal.

In the rest of the world, the Military coup in Turkey managed to shut down or arrest most all the opposition while still pledging support of the UN and the U.S. respectively. The situation in Poland was still bubbling along. Shakeups in the Beijing government in China. In chile, approval of keeping Gen. Augusto Pinochet in power until at least 1989.

It was now Day 314 for the American hostages in Iran and political carrots were dangling in the breeze as a new set of demands called for return of the property of the late Shah.

All that, and so much more for this week of September – the one ending on the 16th, as reported by ABC Radio and their World News This Week.