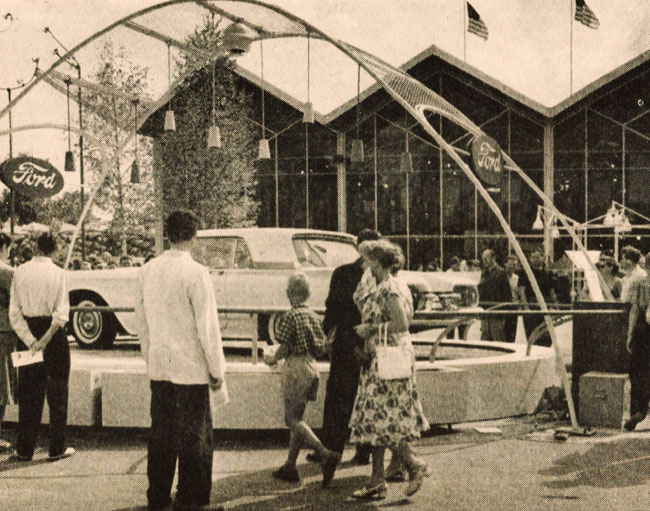 Even during the Cold War there was Ford in your future.

Even during the Cold War there was a Ford in your future.

Before the infamous U-2 incident (the plane, not the band . . .for you who may not know), there was a decided thaw in the Cold War between the U.S. and the Soviet Union. Cultural exchanges were arranged, there was a little less jamming of Radio Free Europe and Soviet Life,a sort of “feel-good Kremlin” glossy magazine was published.

And in 1959 the U.S. was invited to set up a pavilion for the Moscow Fair, as a goodwill gesture. This was also the setting for the now-famous Kitchen Debate between vice-President Nixon and Soviet Premier Khruschev.

The exhibit was sponsored by the American government, and it followed a similar Soviet Exhibit in New York City earlier that year. It featured many displays of the latest “home appliances, fashions, television and hi-fi sets, a model house priced to sell to an ‘average’ family, farm equipment, 1959 automobiles, boats, sporting equipment and a children’s playground, as well as books and vinyl records, this exhibit was intended to narrow the gap between the Americans and the Soviets and improve the political relations between them. However, the “exhibition was also a tool of cultural diplomacy against the Soviet Communist Regime” as the American politicians wanted to demonstrate the advantages of capitalism to the Soviets. This is evident in Vice President Richard Nixon’s speech on the opening night of the Exhibition on July 24, 1959 as he congratulated USSR’s Premier Nikita Khrushchev and the Soviets on their advances in astronomy and rocket science, but quickly returned to focus on the United States’ strong points, especially the concept of freedom.

The various displays of the exhibit, which involved the designer George Nelson, were seen as successful in promoting the American way of life as superior to the Communist regime and lifestyle. For instance, the model of the modern kitchen was a great attraction for most visitors and even sparked the infamous “Kitchen Debate.”

So curiosity was high in the U.S. over Soviet reaction to seeing certain snippets of “daily American life”. And when the fair was over, a lot of questions were posed to the Guides who worked the Fair. The result was this special radio program, produced by CBS News and broadcast on September 13, 1959.