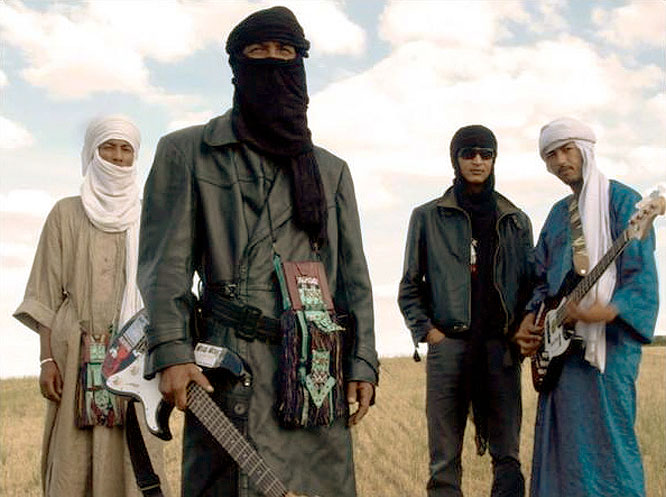 Coming up with a new genre; Desert Blues.

Terakaft – In Concert At FIP, Paris – 2013 – Nights At The Roundtable: Rock Without Borders Edition

You’ve probably heard about Terakaft this year. Described as the next generation of Mali‘s Desert Bluesmen, they did a small tour of the U.S. earlier this year, playing SXSW and becoming a surprise hit in the process. They are also coming back to the U.S., with gigs in Los Angeles (at the El Rey Theater) in November and several other cities.

But what you’ve most likely heard about Terakaft is they have been banned in their native Azawad, Mali. The members of the group are currently living in exile in Algeria. With the new, insane fundamentalist regime having taken over,  they have decided all Western and non-devotional music be outlawed and Militants have been spotted burning amplifiers, instruments and threatening musicians with amputation and death if they continue doing what they love. And you think getting a band together is tough here . . . . .

Needless to say, the world (at least the sane, rational part of it) has come to the rescue by shedding light on this lunacy. And in the process, has made some startling discoveries from a world of music a lot aren’t all that familiar with.

Terakaft are an amazing group of talented musicians. To say they are virtuoso guitarists is an understatement. They play an intoxicating mixture of East and West and all with such subtle, effortless grace and such avoidance of theatrics that their performances are mesmerizing.

This concert, recorded by Radio France – FIP and performed at FIP studios’ auditorium to a sold-out crowd, gives ample evidence of how truly unique this group is. It was recorded on April 4th of this year.

They are coming to L.A. in November. Get tickets now. Check their tour schedule and see if they are playing where you are. See them and experience them.

Despite all the insanity going on in the world – there are parts that are magnificent. Celebrate those.