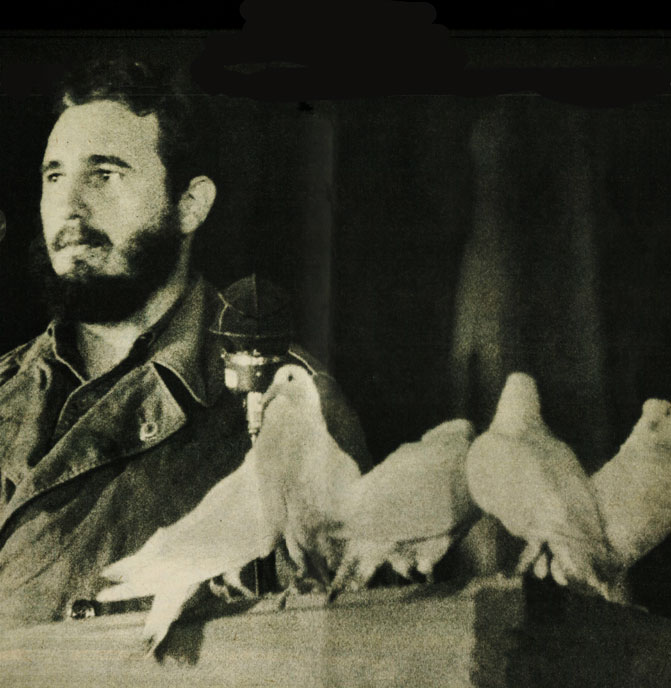 Castro and the Congo. The doves were extra.

September 23, 1960 – Rumble On 46th Street – Communists And The Congo – Report From The United Nations

Castro And The Congo. The doves were window dressing.

September, 1960 was a milestone year for The United Nations. With Africa going through Independence upheavals, Cuba flexing its newly gained Communist muscle and the Soviet Union tossing around the infamous U-2 Spy Plane incident, it was a pretty dramatic, and worrisome time for the cause of peace – however tenuous and fragile it all seemed at the time.

During this week of September, the focus was on the situation in The Congo, a former Belgian colony going through cataclysmic changes on its way to achieving independence.

On 5 September 1960, Congo President Kasa-Vubu announced on national radio that he had unilaterally dismissed Prime Minister Patrice Lumumba, using the massacres in South Kasai as a pretext and with the promise of American backing. Andrew Cordier, the American UN representative in the Congo, used his position to block communications by Lumumba’s faction and to prevent a coordinated MNC-L reaction to the news. Both chambers of Parliament, however, supported Lumumba and denounced Kasa-Vubu’s action. Lumumba attempted to dismiss Kasa-Vubu from his position, but could not get support for this, precipitating a constitutional crisis. Ostensibly in order to resolve the deadlock, Joseph-Désiré Mobutu launched a bloodless coup and replaced both Kasa-Vubu and Lumumba with a College of Commissionaires-General (Collège des Commissaires-généraux) consisting of a panel of university graduates, led by Justin Bomboko. Soviet military advisors were ordered to leave. Allegedly, the coup was intended to force the politicians to take a cooling-off period before they could resume control. In practice, however, Mobutu sided with Kasa-Vubu against Lumumba, who was placed under house arrest, guarded by Ghanaian UN troops and an outer ring of ANC soldiers.

On hand to lend his two cents was the inimitable Communist leader Nikita Khruschev, premier of the Soviet Union and a host of African dignitaries.

On his way to join the proceedings was Cuban President Fidel Castro, and another wave of controversy to take place later on in the week.

But this latest burst of Communist activity and debate was covered in a special report by NBC Radio news, giving highlights of the proceedings and previews of coming attractions.

Never a dull day it seems, where the UN is concerned.