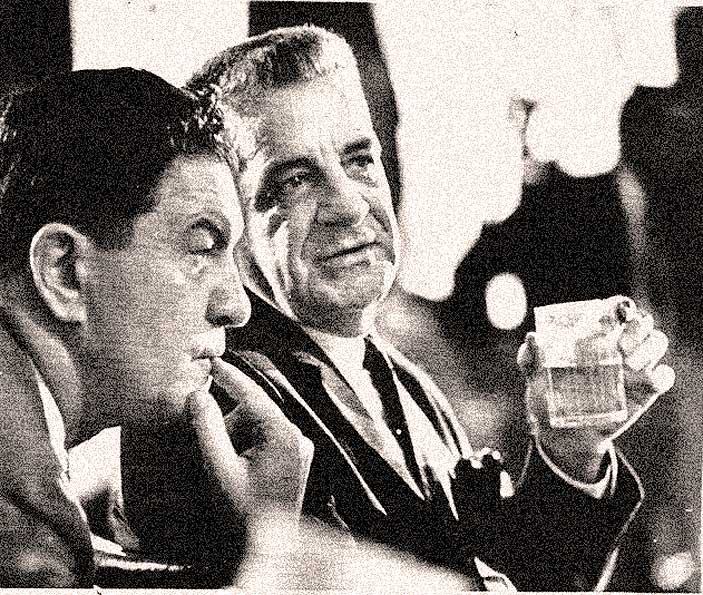 The audible sound of jaws dropping.

Busy month for scandals, revelations and upheavals. September in 1963 was no different, it seems. On this day in September, the McClellan Crime Committee Hearings on Capitol Hill were going full speed ahead, with star witness, organized crime figure Joseph Valachi poised to give bomb-dropping evidence on the activities of one of the hithermost secret societies in America; the Cosa Nostra, or Mafia as we have come to know them.

Valachi was scheduled to testify in public later in the week, but that didn’t prevent bombs from dropping anyway. Testimony was forthcoming by a number of other witnesses who revealed inner-workings of the Mafia previously unknown. It all made for great TV and riveting Radio.

While revealing the existence of these syndicates and that they were referred to as “families,” he also disclosed the names of New York City’s Five Families. According to Valachi, the original bosses of the Five Families were Charles Luciano, Tommaso Gagliano, Joseph Profaci, Salvatore Maranzano and Vincent Mangano. At the time of his testimony in 1963, Valachi revealed that the current bosses of the Five Families were Tommy Lucchese, Vito Genovese, Joseph Colombo, Carlo Gambino, and Joe Bonanno. These have since been the names most commonly used to refer to the New York Five Families, despite years of overturn and changing bosses in each.

And on the other side of the Atlantic, another scandal was rocking the British government. The name Christine Keeler was topic-A in conversation around London this month. Keeler was a prostitute (aka: Call Girl – Good-time Girl – Working Girl) linked to affairs with John Profumo, Secretary of State for War and Soviet agent Yevgeny Ivanov, a senior Naval attachè at the Soviet Embassy in London. Keeler was accused of passing secrets to Ivanov via pillow-talk with Profumo and the scandal erupted into a political crisis for the MacMillan government which eventually ended the career of John Profumo and briefly tossed Downing Street into a state of chaos.

Less hysterical, but no less controversial was news that President Kennedy had asked for approval of grain shipments to the Soviet Union, as well as Congress passing a Kennedy sanctioned Tax cut package.

And all that, plus much-much more happened on this September 23, 1963, as reported by NBC Radio News On The Hour and a Special Report on The Valachi Hearings.