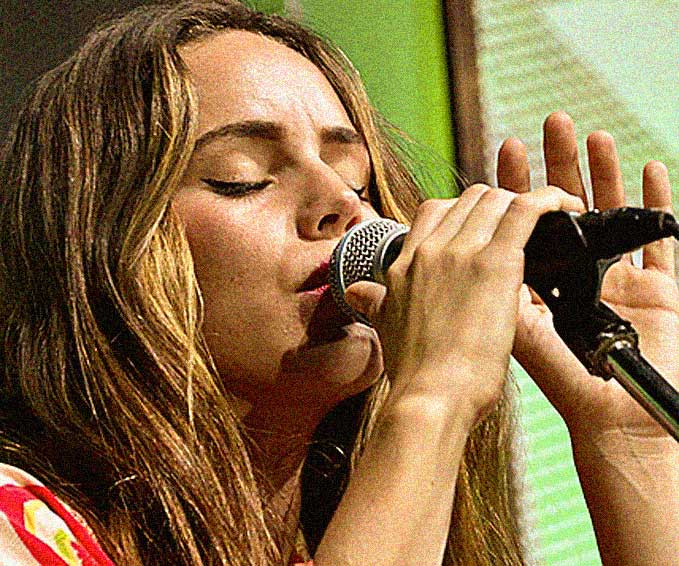 Camila Sodi of Ella y El Muerto - femme fatale with a dark side.

Camila Sodi of Ella y El Muerto – femme fatale with a dark side.

Back over to Mexico City tonight for a studio concert by Ella y El Muerto (She and The Dead – according to Google Translate, but . . . .), recorded in August of this year.

Ella y El Muerto is the brainchild of Camila Sodi, who is something of a popstar in Mexico. She is probably better known as an actress and model, as well as singer-songwriter. By her own admission, this is something of a journey into the dark side, influenced by Portishead, Nine Inch Nails, Depeche Mode, Skunk Anansie and a few others. Ella . . . combines elements of Electro Pop, Industrial and Trip Hop, all with a Mexican flavor and with a semi-autobiographical twist. Sodi, estranged wife of noted Mexican actor Diego Luna, is going through the pangs of separation and possible divorce, and much of her music is introspective in that sense-of-loss motif. Still, it’s gripping and engaging and Sodi doesn’t shirk from the responsibility of diving off the deep-end musically.

Ella y El Muerto’s debut album came out in May of this year. It was recorded in Los Angeles with the aid of fellow Mexican rockers Kinky, who ably assisted in production and and execution.

So Ella y El Muerto is a new band. But bands aren’t new to Camila Sodi, who, at the age of 26 is a veteran of several groups as well as coming from a musical family which includes noted Mexican singer Thalia and a beginners stint in her brothers band Lemon Moon.

Just getting started, Ella y El Muerto no doubt have plans for later on this year and 2014, but so far there’s no word aside from local gigs. Since they have a Facebook page which they keep up to date, check them out and see what they’re up to.

In the meantime, check them out via Terra Music Live and give them a listen.