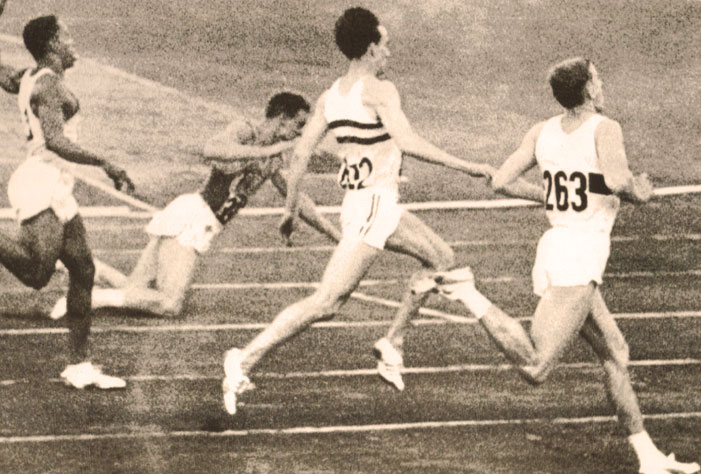 Not a good day for the relay team.

Not a good day for the track relay team, but that guy from Louisville was something else.

This week, 53 years ago, Rome was playing host to the 1960 Summer Olympics. In this report, re-capping the events for the day – it was about upbeat results in Swimming, Rowing and Basketball, offsetting the less-than-spectacular results in Track and Field. The U.S. Basketball team beat Yugoslavia 102-42, American Rowers qualified in five events, American swimmer Chris von Saltza won the Women’s 400 meter freestlye while Men’s teams won gold in 400 meter and 800 meter relays. And Light-Heavyweight Cassius Clay won over a Russian in Boxing.

After summing up the previous days activities, the broadcast switches to a live report from Rome during the 800 meter semi-final in Track and Field, where disappointing showings by the U.S. team continue, and another failure to qualify.

All that and a lot more, as reported by future gameshow host Monte Hall over NBC Radio for September 3, 1960.