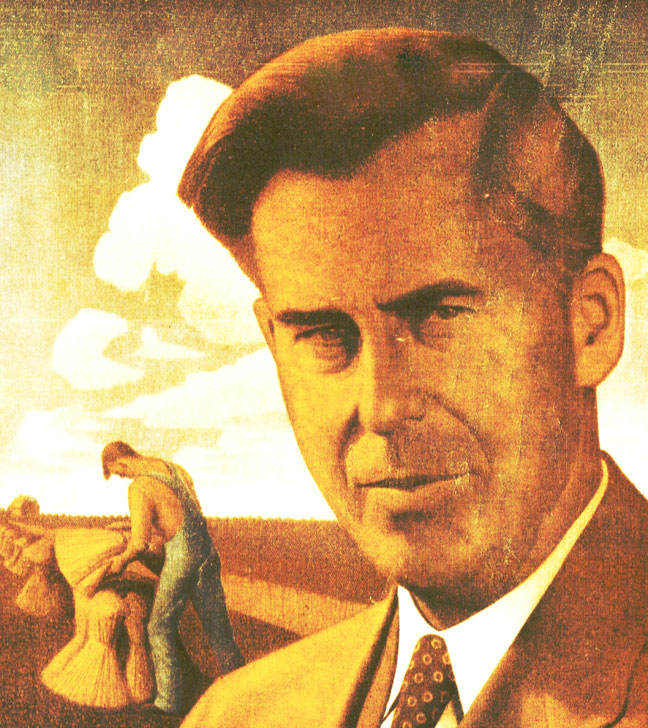 Had more than a few prophetic words for our state of affairs, even in 1948.

Had more than a few prophetic words for our state of affairs, even in 1948.

Patrons can download this audio for free: Become a Patron!

October of 1948, aside from everything else going on in the world, was also a Presidential campaign month. The Democrats had Harry Truman running for re-election (actually, election since he had assumed the Presidency when Franklin Roosevelt died in office in April 1945) and the Republicans had Thomas Dewey, running again after a devastating loss to FDR in 1944. Henry Wallace was FDR’s vice-President in 1940 and prior to that was Secretary of Agriculture.

But Wallace broke with the Democratic Party over Truman’s leadership and struck out on his own as a third party candidate. Since Third parties have never really been recognized much in the mainstream media, or even considered viable alternatives by the D.C. establishment, Wallace had an uphill battle.

But there was always that hope something would change, some miraculous event that would alter the course of history. In the case of 1948, it was the stunning upset by President Truman over Thomas Dewey – but that was the DC establishment.

Wallace followed his own course, and was roundly lambasted by both established parties as being pro-Socialist, pro-Moscow, a subversive bent on destroying the fragile fabric of American politics with radical ideas.

Trouble was, we were rapidly falling into a Cold War with the Soviet Union, coupled with a wave of newly independent nations and we needed some new thinking of our Foreign Policy to go along with these new problems. The danger was, there were many on Capitol Hill who were urging an armed confrontation, and the possibility that this new confrontation would inevitably lead to nuclear war was a terrifying prospect to most Americans.

So in this campaign talk, Wallace discussed the issue of America in danger of losing the peace and what could be done about it. As someone who didn’t feel Russia was either equipped or had the desire to engage in another war, Wallace felt it was urgent to engage in negotiation, to find a settlement to the question of Germany and to find some enduring path to peace not based on armed aggression.

Needless to say, Wallace’s case made great fodder for both Democrats and Republicans who felt strongly that Wallace was playing into the Communist hands and he was largely dismissed as being a Communist sympathizer.

But for all the accusations of Wallace’s motives and ideas, the one fact remained true; we were rapidly growing into the Military-Industrial complex Eisenhower would later warn us about, and our fear of Communist domination blind-sided us from the real issues taking shape and into a state of perpetual fear and anxiety, and it shaped our society and our political motives for decades.

If Wallace had, by some miracle, won the Presidency, his vision would have been almost impossible to accomplish just by the sheer frustration of having a Congress uniformly against you. If Truman complained of a “do-nothing Congress” in 1948, Wallace would be relegated to figurehead status, since a third party majority in both houses, or in either house, would have been practically impossible to achieve. Which may give some indication as to why certain fringe parties, like The Tea Party, decided it was best to join an established base (like the Republicans) and hijack that party, rather than establish themselves as a Third Party, realizing what the outcome would be.

I suppose that says something about the Two-Party system. But even more, it gives some idea how difficult it is to promote real change, particularly in Washington, and why subverting an established political party is easier than slugging it out on your own.

And in 1948 we had some indication just how impossible that could be.

Here is that address by Progressive Candidate Henry Wallace, given on October 4, 1948.