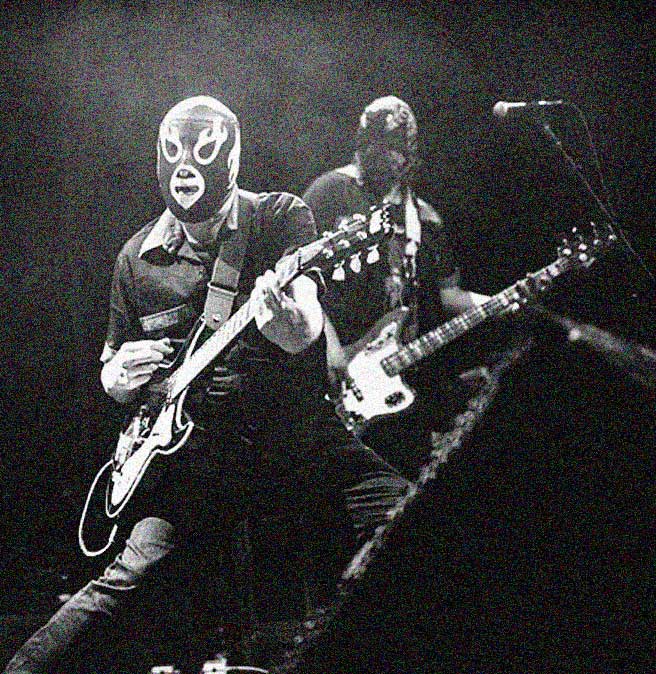 Who says you can't have Surf and Lucha Libre at the same time? (Photo: Jillian Mitchell)

Lost Acapulco – In Session At Radio 3, Madrid – 2013 – Nights At The Roundtable: Rock Without Borders Edition

Who says you can’t have Surf and Lucha Libre at the same time? (Photo: Jillian Mitchell)

Over to Madrid by way of Mexico for a session at RNE Radio 3 by Mexican Surf-Cult band Lost Acupulco.

The spirit of Dick Dale lives, and is kicking ass in Mexico, and has for some time. Lost Acapulco is probably one of the best known bands of the Latin extension, but there are lot of bands, particularly in the Tijuana/Jalisco area that are heavily into Surf as well. Possibly influenced by Lost Acapulco or just carrying on the Surf tradition so popular on the West Coast of the U.S. in the 60’s.

Around since 1996, Lost Acalpulco have the extra added attraction of bringing a taste of Lucha Libre with them on their stage appearances. Not that the concert is broken up into wrestling matches, but the band members sport the characteristic masks, synonymous with the Lucha Libre style. They have achieved Cult status and have a huge following all through Latin America and Spain. They’ve made appearances at The Fillmore in San Francisco as well as some of the Festivals around Europe. So they are no stranger to most audiences to the south and east of here. And most audiences love them.

But you can’t see the Lucha Libre part on this post – it’s just audio. Instead, what you get are some excellent examples of the current Surf scene in Mexico.

So if you haven’t done much investigating of the scene just South of us, check these guys out and see what you think. It was recorded on October 3rd, so it’s new.