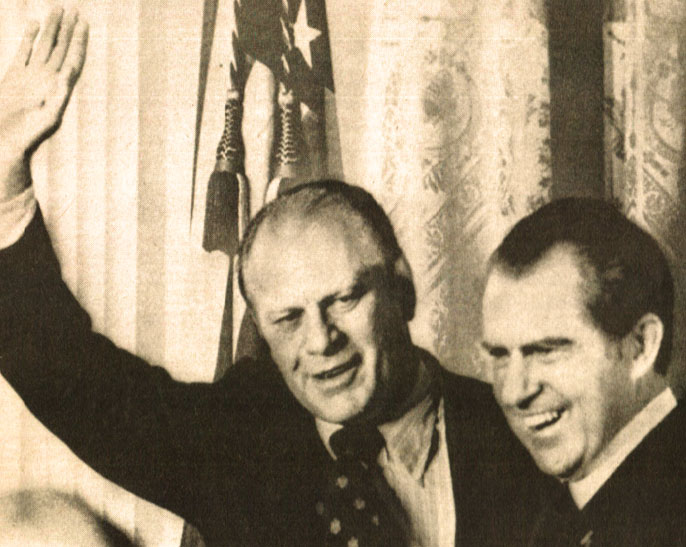 With all the warmth of a prairie blizzard.

With all the warmth of a prairie blizzard.

Not quite one of the calm weeks, this week of October 14th in 1973, but a somewhat bloodless one – at least as far as the White House was concerned.

In a week where Watergate was taking a close backseat to the events unfolding; namely the abrupt resignation of vice-President Spiro Agnew, amid a scandal involving income tax evasion and a laundry list of other offenses, it was still a week where Richard Nixon was wishing the focus of attention would be anywhere else but Capitol Hill.

So Gerald Ford was appointed, somewhat reluctantly, by Nixon and the awkward task of patching up holes in credibility were underway. Ford was a likable sort of nominee, he had good working relationships on both sides of the aisle on Capitol Hill, and best of all, he had very little in the way of baggage in which to be scrutinized during confirmation hearings. It’s just Ford was more or less thrust on him by the GOP leadership as a kind of love offering to appease the ravenous gods of public opinion.

No Spiro, but a safe distraction from the continuing saga of Watergate.

For a day or so, anyway. By the end of the week, a Federal Appeals Court ruled the President was not above the law with reference to withholding pertinent sections of tape recorded phone conversations. And the ball was in Nixon’s court as to whether or not to appeal to the Supreme Court.

But there was that new War in the Middle East to consider, with a heavy toll being exacted on both sides of the conflict. The Russians were airlifting food and supplies to Egypt and Syria, while the U.S. offered to make good on whatever munitions losses the Israelis encountered.

The hope was, at least with Secretary of State Henry Kissinger, that the tenuous air of detente between the U.S. and Russia wouldn’t be compromised. The Arabs were heavily considering cutting off oil supplies to the U.S., and that was an unpleasant consideration.

And that’s much of how the week went, the week that ended on October 13th and was staring October 14th in the face, as presented by CBS Radio’s Washington Week radio news program.