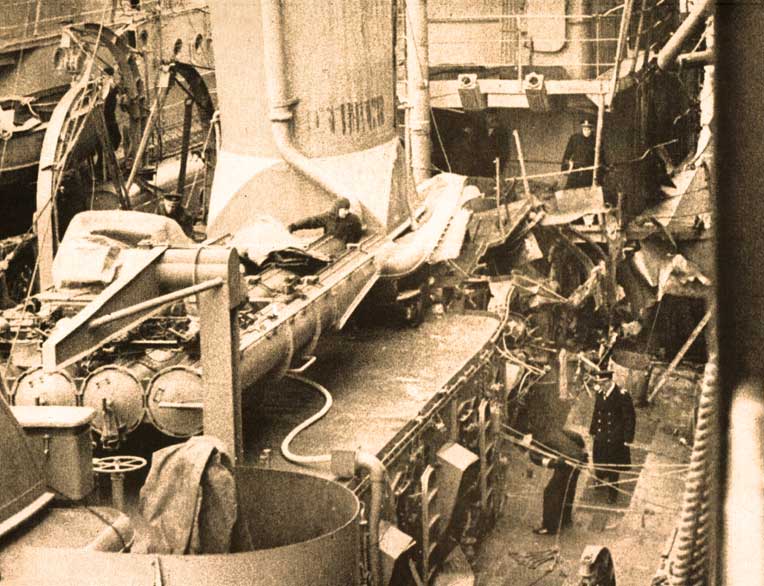 U.S.S. Kearney - according to Berlin, nothing happened.

U.S.S. Kearney – according to Berlin, nothing happened.

A day where War loomed ever-closer for U.S. involvement, this October 18th in 1941, a day where Europe was knee-deep in it.

Inching closer to a shooting war with the United States, surfaced from the Navy Department of a U-Boat attack on the Destroyer U.S.S. Kearney, providing escort to supply ships heading to England. The attack took place off the coast of Iceland and American reporters scrambled for answers from German Press attachès, who all claimed ignorance the event ever happened. The German Propaganda Ministry did admit Allied ships were sailing through German waters, but that was about it.

In other news, the Eastern Front was filled with conflicting reports. First was an unsubstantiated report the Russians had re-captured the Ukrainian town of Orel, but no confirmations were available at press time. German bombers were staging air-raids over Moscow.

Support for increased involvement of the U.S. was being heard from Capitol Hill. Namely, one Congressman Vito Marcantonio, who was initially in support of non-involvement, now came to the conclusion it was imperative the U.S. send troops to open up a Western front in Europe.  As the British press put it, Americans as well as Britons were coming to realize just how serious the situation was and there was no such thing as neutrality in this war.

News also surfaced from Free French headquarters in London that the German High Command announced execution of two Frenchmen attempting to smuggle 15 French Airforce Cadets to England were captured and shot. The 15 cadets were sentenced to life imprisonment in labor camps at Dusseldorf, Germany.

And news from the Pacific was disturbing, with reports that all American ships were ordered to dock at the nearest British or American port were viewed as one more step down an ominous road. And word that orders were given to strengthen American Military bases in the Pacific region was viewed as further evidence something was afoot. Word around Capitol Hill was the move had been done at the urging of some highly-placed British officials who felt a German victory over Russia would mean an impending invasion of Britain and that U.S. involvement in a War with Japan now would eliminate Japan early on. Even though it was deemed as gossip, some British papers were reporting the story as a real possibility.

All that was seen as an end to Neutrality by the U.S. and isolationists were getting ready for another round of protests.

And so the day went, this October 18th in 1941, as presented by the NBC Blue Network’s News Of The World program.