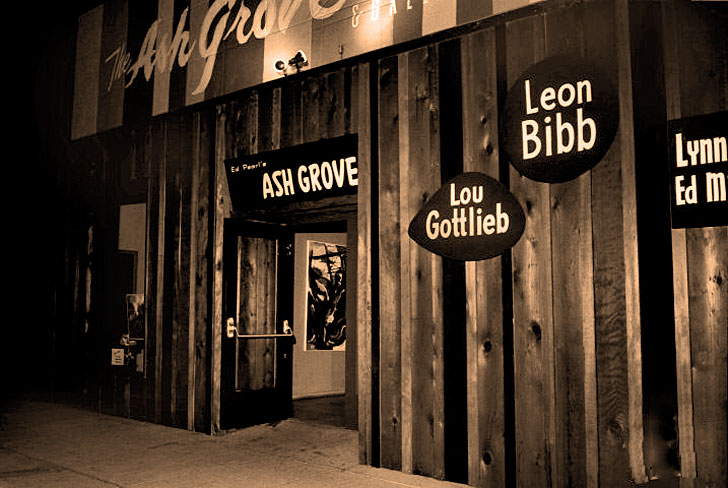 An inconspicuous place on Melrose in West Hollywood was a launching pad for a wave of Folk Artists.

An inconspicuous place on Melrose in West Hollywood was a launching pad for a wave of Folk Artists.

Click on the link here for Audio Player – A Night At The Ash Grove with Les Claypool – KRHM-FM – October 24, 1959 – Gordon Skene Sound Collection

Anybody living in Los Angeles from the 1950s through the 1970s will instantly recognize The Ash Grove. It was one of the great Folk clubs in Southern California and it was the launching pad for numerous West Coast artists throughout that time.

Tonights post is doubly interesting in that it’s a live broadcast via radio station KRHM, which eventually became KMET (and now The Wave). FM was still the domain of the hobbyist and the audiophile, and the audience was somewhat limited. But because of that, there was a lot of latitude in what could be broadcast. And since Folk was very much a popular genre at the time, FM was the perfect platform to further the cause.

This broadcast, from the night of October 24th 1959 featured one of the first of the live concert remotes coming from the club aired by KRHM. Mid-way through this 90 minute excerpt is an appeal by host Les Claypool, to let the station broadcast these live club dates weekly, rather than monthly.

Featured on this episode were Leon Bibb, Lou Gottlieb (of The Limelighters) and recorded bits featuring another well-known L.A. folk duo Bud & Travis and several other acts. Unfortunately, all that’s available from this show is a 90 minute portion of what was a 2 or 3 hour live show. There are others. And we’ll get around to those on future occasions.

But for now, you get an idea what the L.A. folk scene was like as well as what early FM radio was like in Los Angeles.