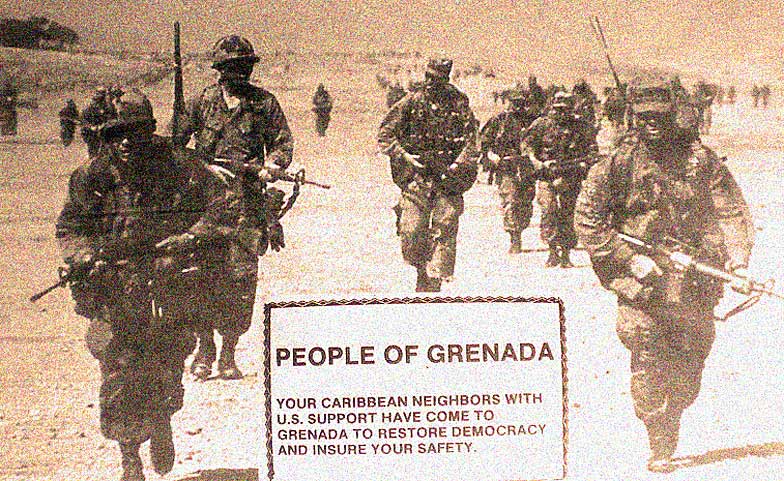 This day, 30 years ago we were busily invading the tiny Caribbean island of Grenada in what has been described as “A lovely little war”. Considered a threat to stability in the region, the small island was at the center of a controversy involving Cuba, a lot of military equipment, the overthrow of a government and the Cold War.

Grenada, originally a British colony until 1974 when it became an independent country until a coup toppled the government in 1979. An internal power struggle in 1983 saw the murder of Maurice Bishop and an OAS request to Washington for intervention.

The controversy arose when a media blackout was enforced as well as conflicting stories over the welfare of American Medical students who were living on the island, in addition to  numbers of troop and enemy casualties resulting from the invasion. Also in question was the military operation itself, which was fraught with foul-ups, including the invasion forces relying on tourist maps to navigate around the island.

In a strange way, it provided a distraction from the bigger story, which was the terrorist bombing of the Marine Base in Beirut, but it also focused on just how ill-prepared and uncoordinated our own armed forces were in staging an invasion, even of an island as small as Grenada. It also brought into question our role as “The Worlds Policeman” and ultimately, was that trip necessary? 30 years later it’s both celebrated and ignored – remembered and forgotten, depending on who you talk to.

Here is an episode of CBS Radio’s version of Face The Nation with Leslie Stahl, originally broadcast on October 30th. It recounts the invasion on the 25th and offers reaction to it and how it coincided with the Beirut bombing only days earlier.