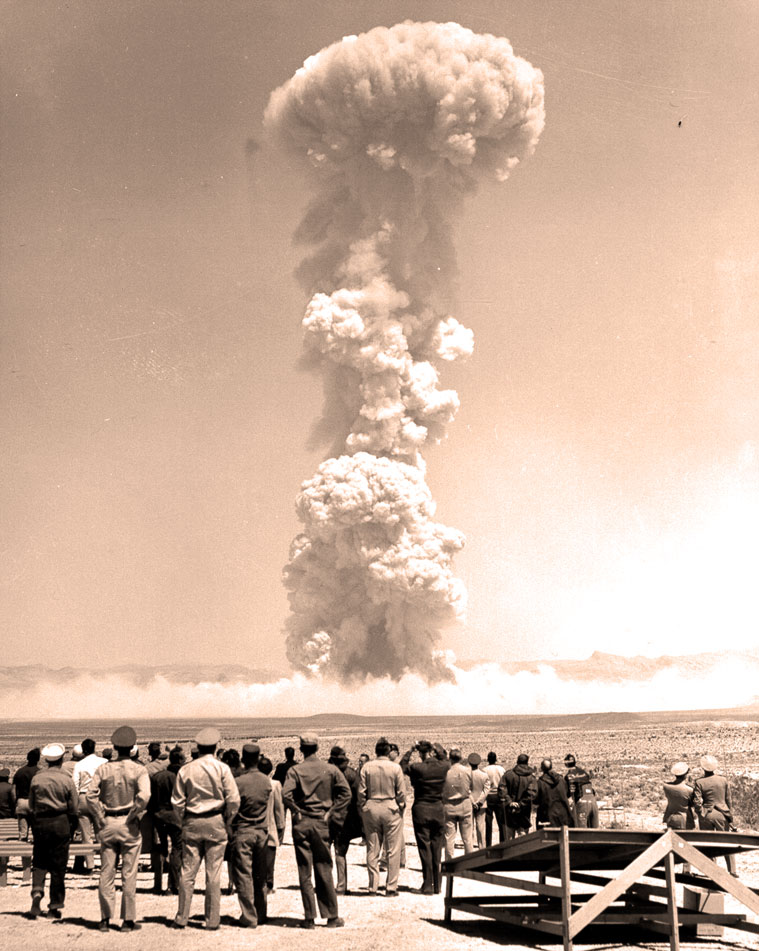 The reason everyone was nervous.

The reason everyone was nervous.

Knee-deep in Cold War, this November 1st in 1951. Atomic testing was continuing at a rapid pace, with advances of new tests making results of old tests obsolete. On this day the largest detonation took place so far, in conjunction with troop maneuvers and some 1,000 paratroopers dug in along the “front line” some 6-10 miles away from Ground Zero. No injuries reported, but windows were shattered in Las Vegas, some 75 miles away.

In Britain, Prime Minister Churchill urged a speed-up in its nuclear program with hopes of an Atomic test ready in 6 months time.

As one Scientist was overheard saying in Chicago, with reference to the Atomic race between the U.S. and the Soviet Union – “were approaching the point of no return”.

The future was getting braver by the second.

Meanwhile, the new Administrator of Foreign Aid, Averell Harriman was in London for talks with the new British cabinet over increased aid to meet the economic pressures brought on by rearmament.

Speaking of Britain, Egypt was protesting Britain’s cutting-off of  fuel oil to Cairo from the Suez Canal. The tense situation was escalating with the Egyptian Minister warning revolution was in the works if the situation didn’t improve.

All was not well in Morocco either. Moroccan Nationalists and Police clashed as riots broke out in Casablanca. Three Nationalists were killed. More violence was promised as the Arab Quarter in Casablanca was put under Military guard.

In Korea, truce talks were going slowly, but at least making some progress as general agreement was reached as to where the armistice line would be in the Eastern peninsula. While the talks were going on, fighting had pretty much stopped, at least for now. Even though, by the sounds of the Truce-talk arguing, the war was going to go on for a long time.

At least things were going well for the Royal newlyweds as Princess Elizabeth and Prince Phillip greeted some 1500 well-wishers at the British Embassy in Washington, during their U.S. visit.

All that, and Edward R. Murrow’s report from Paris where Peace Talks were scheduled to begin, for this November 1st in 1951 as reported by Don Hollenbeck of CBS Radio.