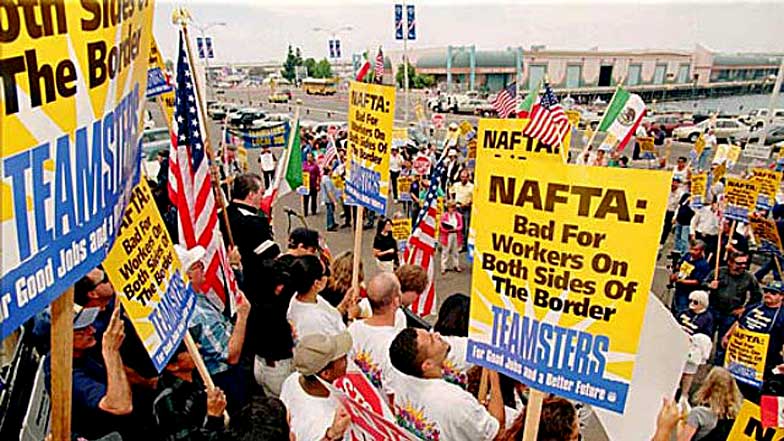 Not everyone was thrilled.

Not everyone was thrilled.

Twenty years ago, this November 18th, it was most about the vote in Congress to pass the North American Free Trade Agreement. Considered dead-in-the-water only a month earlier, with some Presidential arm twisting, the bill was passed by a comfortable margin. Proposed in 1986 during the Reagan Administration, the bill would eliminate trade barriers between the U.S., Mexico and Canada. Ratifications to the bill were ready in 1992 but weren’t signed and the bill was left hanging until the Clinton administration took over.

The bill has become fraught with controversy over the years, but on this day in 1993 it was about to become the law of the land.

In other news – Airline flight attendants went on strike after a breakdown in talks the night before. Many flights were cancelled and the threat loomed that it would go on until after Thanksgiving.

The Miners, on the other hand, settled key issues on their six month strike. Still looming were charges of strike violence by certain members of the Union.

And in Mogadishu, Somali War Lord Mohamed Farrah Aidid reappeared, having been dropped from the UN’s Most Wanted list. The crowd turnout was huge and it was Aidid’s first appearance in public since June.

Leaders of Bosnia‘s warring factions were meeting in Geneva to discuss, not peace, but what to do about feeding and sheltering 3 million refugees while the fighting continued through Winter.

Seems madness just wasn’t going to stop for anything.

And that’s a small sample of what went on this November 18, 1993 as reported on The CBS World News Roundup.