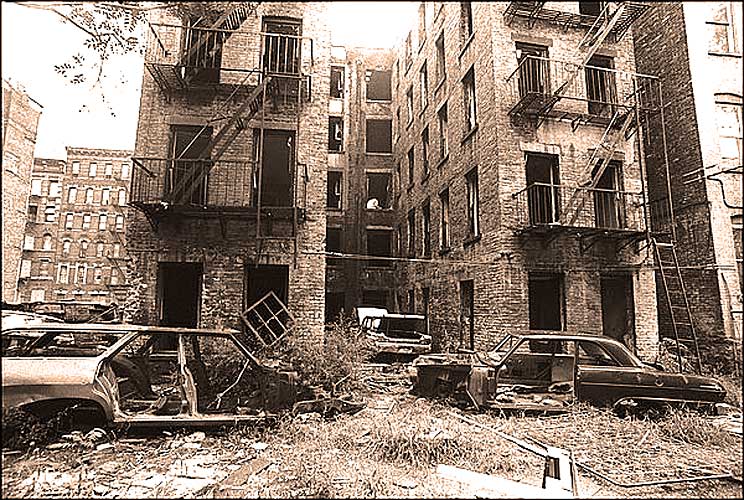 In Real Estate lingo - A Fixer-upper that needs TLC.

Home, Sweet Blight – Future Of The American City In 1972 – Past Daily Reference Room

In Real Estate lingo – A Fixer-Upper in need of TLC.

For all intents and purposes, it got its start somewhere in the early 1950s, when the population explosion brought about an exodus to the suburbs and the development of the tract-home. The city stopped being the center of activity, with the development of the Shopping Mall, and the inner city became the domain of those who couldn’t afford to escape. And as the population flight continued through the 1960s and 1970s, so did the flight of businesses and manufacturing. With deregulation, the flight of manufacturing to other countries with many companies merging and abandoning factories and cities, leaving hundreds of thousands unemployed and vast areas empty and decaying.

And cities like Detroit, once bastions of industry with teeming civic centers became wastelands. Turning what were once thriving neighborhoods into what are now slowly being replaced by farmland.

But the writing was on the wall, and it was there for a long time. And this broadcast of A Look At America‘s Metropolitan Future from the NBC Radio series Second Sunday, took a look at what was happening and what was being attempted to change it.

Attempted, because in 1972 we had no idea about Corporate downsizing, leveraged buyouts, or overseas outsourcing. No. Those were heading into our future and we hadn’t gotten there yet.

In 1972 we still thought there would be an easy fix to our problems. If we just came up with clever ideas to bring people back into the cities, all would be fine.

But as we’ve seen, it’s all easier said than done.

Here is what they were thinking about in 1972.