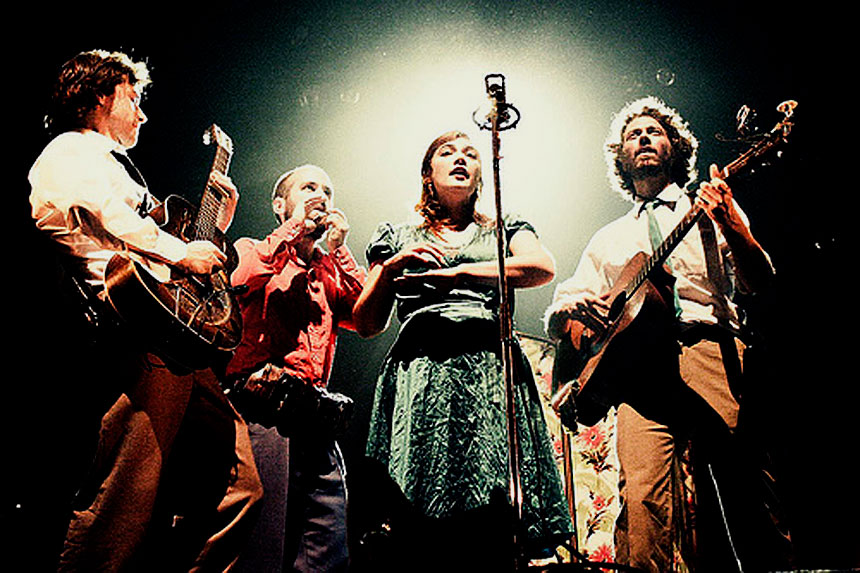 Moriarty – In Session At FIP – 2013 – Nights At The Roundtable: Rock Without Borders Edition

Click on the link here for Audio Player – Moriarty in session at FIP – December 2, 2013 – Radio France/FIP

Moriarty are one of those bands who are a mashup of styles and countries and do it remarkably well. Started in 1995, this French, American, Swiss and Vietnamese band have named themselves after Jack Kerouac’s hero Dean Moriarty from On The Road. That should be a clue as to how eclectic they are.

With four albums to their credit, including a new one, Fugitives, which came out in October of this year, Moriarty have been getting widespread critical acclaim for what is their stunning take on American Roots music. Coupled with the haunting vocals of Rosemary Standley, it’s clear why they have gotten the following and good reviews.

Recorded just a few days ago by the venerable and exquisitely eclectic FIP (Radio France’s offbeat service), Moriarty give a sample of what makes them unusual and so popular throughout the world.

At just a little over 32 minutes, have a sit-down and a listen to one of the more unique and adventuresome bands coming out of the New Folk scene. They are currently touring everywhere from Europe to Australia this year and I suspect they are getting ready to do a tour of the U.S. at some point.

In any event, they are a must-see. But don’t take my word for it.