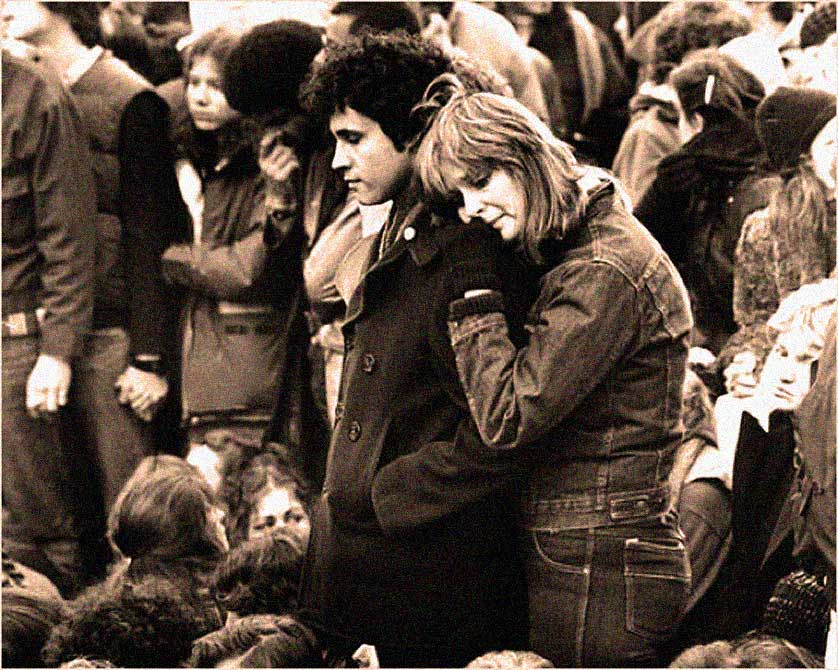 For those who hadn’t hear it, the news of the shooting death of John Lennon the night before reverberated all over the world, this December 9th in 1980. Stunned shock and disbelief. Spontaneous vigils, gatherings of people who just wanted to express a feeling of sadness and loss. The din of Lennon’s music filled the air and poured out from seemingly every window.

But on this December 9th in 1980 the grim business of arraigning the shooter, finding the motive, ordering mental evaluations, and the task of answering an avalanche of questions was underway. Yoko Ono issued a statement saying there would be no funeral, but instead all friends and fans would be invited to a memorial to pray for Lennon’s soul. The time and place were not yet finalized.

The nuts and bolts of crime scene investigation was ongoing, and the news for this day was about reactions from fans and people on the street to President-elect Reagan who said the killing was senseless, but refused to back down on his opposition to new gun control laws.

And the world turned.

But there was other news on this day – news that fears were growing of an impending Soviet invasion of Poland. NATO was informed a possible invasion of Poland could take place in a matter of hours and NATO would have almost no advanced warning. Washington was reported to have ordered four AWACS Radar Warning planes into West Germany to monitor the situation on the Polish border.

On Capitol Hill, the senate couldn’t muster the necessary 60 votes to break the filibuster on the Fair Housing Bill so it was withdrawn from consideration. Designated Senate Majority leader Howard Baker promised it would come back next session. At SCOTUS, a 5-4 vote gave prosecutors the right to appeal criminal sentences they believe to be too lenient.

Meanwhile, the team investigating the murders of three nuns in El Salvador a week earlier were scheduled to return to the U.S. to present findings to President Carter.

All that, and much more (as always) via CBS Radio News, along with a commentary from Walter Cronkite, for December 9, 1980.