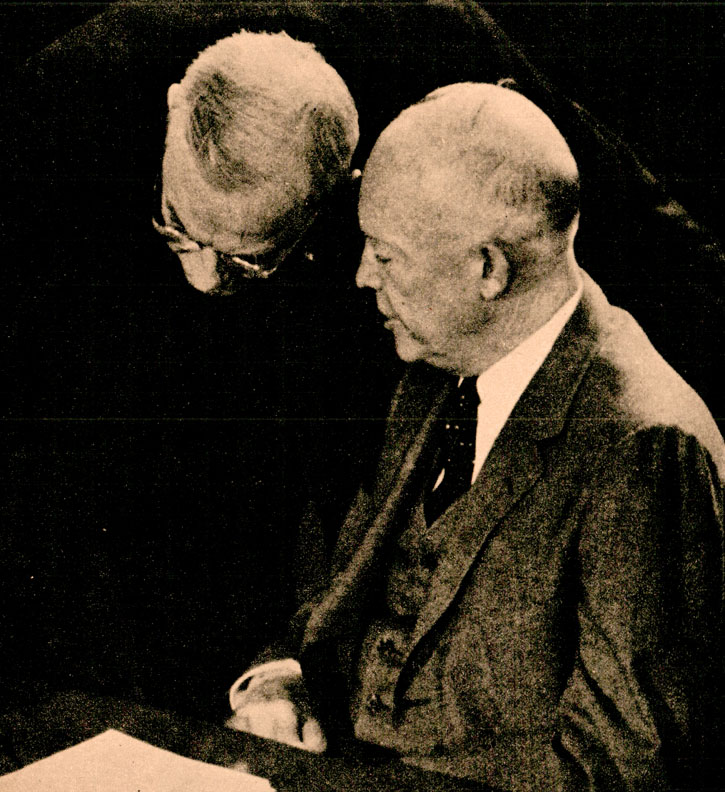 Pres. Eisenhower with Sec. of State Dulles - shoring up a lot of sagging support overseas.

December 23, 1957 – President Eisenhower And The NATO Conference: Putting On The Happy Face.

Pres. Eisenhower with Sec. of State Dulles – shoring up a lot of sagging support overseas.

On this day in 1957 a brief respite from the onslaught of Christmas shopping and Christmas music to get a report from President Eisenhower on the goings-on at the NATO Summit conference in Paris.

President Eisenhower: For the fifth time within the past five years, the Secretary of State and I have, together, returned to Washington after international conferences on foreign soil. This time we have just come from a Paris meeting with Heads of Government of the 14 other NATO nations.

In addition to the scheduled NATO meetings last week, I had individual conferences with most of the Heads of Government. In these more was involved than mere expressions of mutual good will. In each, the purpose was to discuss frankly our viewpoints about problems of common interest–to remove obstacles to mutual understanding.

In the debates of the full Conference there were thoroughly discussed specific problems of every conceivable nature, so as to eliminate deficiencies in our collective arrangements.

It was an inspiring experience to watch, in these meetings, common policies take shape affecting the great questions of peace, security and unity. Planning for carrying into effect these policies was likewise necessary. In this work, all of us found a special advantage, which came out of the bringing together of Heads of Government. In this way there was placed behind NATO’s future programs the authority and influence which these leaders hold.

There was one basic purpose implicit in every discussion and debate of the Conference. That was the pursuit of a just peace.

Not once during the week did I hear any slightest hint of sabre rattling or of aggressive intent. of course, all of us were concerned with developing the necessary spiritual, economic and military strength of our defensive alliance. We are determined that there must be no war. But we never lost sight of our hope that the men in the Kremlin would themselves come to understand their own need for peace–as well as our sincerity in desiring a just composition of differences between West and East.

At the end, the Conference unanimously adopted a declaration of principles to guide future NATO efforts and plans. Measures were adopted for effective scientific and economic cooperation and coordination. We arranged for procedures to insure timely and close political consultation among ourselves, with respect to any problem that might arise.

1957 was a year of a lot of upheaval, and it was also a year of what many considered to be flagging support of our NATO allies. Not that Moscow was particularly winning this popularity contest, it’s just that many of the NATO allies were former colonial powers and the colonies were grumbling.

The independence movements were well underway. The situation in Algeria, a French colony, was boiling over and the Congo was close behind. The big issue however, was Nuclear Arms, and what was the future of the Atomic (and now Hydrogen) bomb. This was the part the Cold War came in – in his portion of the address, Secretary of State John Foster Dulles went to great lengths to say it was NATO who were in favor of a ban of Nuclear weapons, but that it was the Soviet bloc who repeated voted against in at the United Nations.

And so the Arms race continued, and so did the campaign to shore up flagging support by pledging to strengthen our role in security (i.e. we were going to send more troops to more places we hadn’t been before).

All that, and a lot more for this December 23rd in 1957 – another year in the Nervous Fifties and another reason Miltown and The Martini became our Great National Necessities.

Here is that combined Address by President Eisenhower and Secretary of State John Foster Dulles.