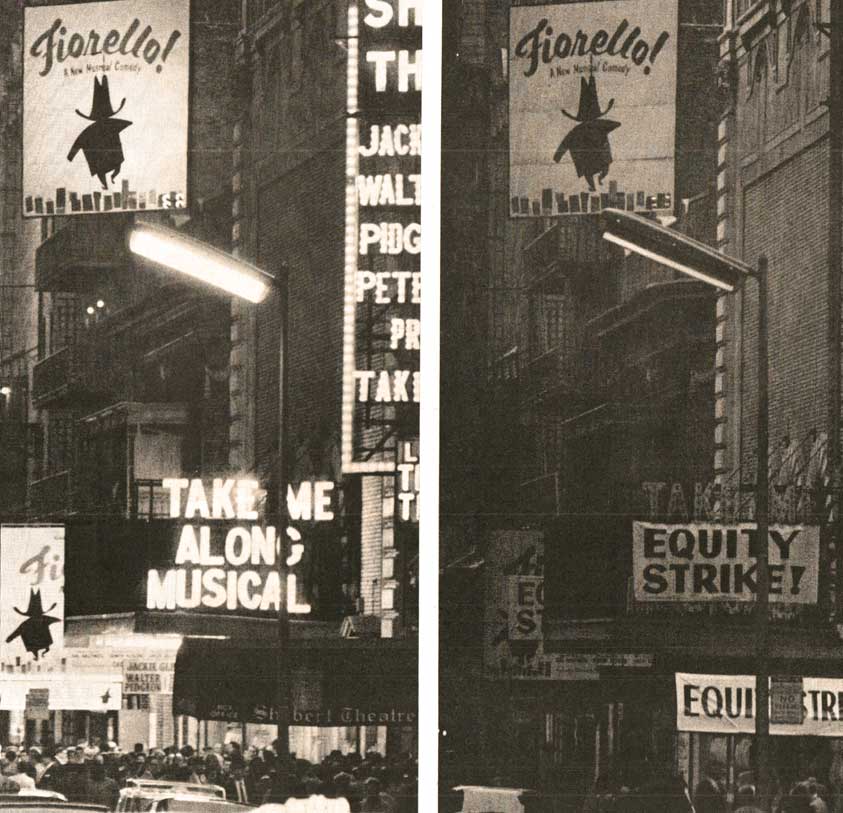 The year the lights went out on Broadway.

New York 1960: The year the lights went out on Broadway.

Sometimes crazy years happen locally. In this case, it was New York going through the roller-coaster called 1960.

Presented by WCBS in New York, this year-end wrap-up highlights much of the goings on in the Big Apple for that first year of the 1960s.

Some year. A strike between Actors Equity and Producers effectively shut down Broadway for the first time in its history, as actors turned out in droves to picket theaters in what was shaping up to being one of the busiest years for The Great White Way. No dice, this year. Stalemate, gridlock and dug-in feet and the strike dragged on for 8 days before any kind of settlement was reached, due in large part to pressure from City Hall and business groups who saw disaster looming if that thing went on any longer.

A  lot of strikes that year. A threatened subway strike started 1960 in New York, but was averted at the last minute. A wildcat bus strike in June stranded commuters owing to a one-way street dispute, but lasted three-days. A strike by the Long Island Railroad threatened to strand commuters in July. After 32 days the strike was ended.

And New York cops were getting their fair share of woe. Reports of moonlighting by New York’s finest surfaced. An investigate ensued and it was learned as many as 70% of the New York Police force was moonlighting other jobs. The Fire Department wasn’t immune to charges of moonlighting either. A near riot broke out between  demonstrating Firemen in front of City Hall. After four months, a compromise of sorts was reached.

And then there was Hurricane Donna to deal with, bringing damage and flooding to Manhattan and Long Island before leaving the scene. And by the end of the year a disaster of another kind – a mid-air collision between two passenger jets resulted in a horrific scene of death and destruction.

And if all that wasn’t enough – New York played host to a visiting Nikita Khruschev, along with Castro, Tito and most of the Communist Bloc who were paying a visit to the United Nations.

It was just one of those kinds of years, and it all seemed to happen in New York.