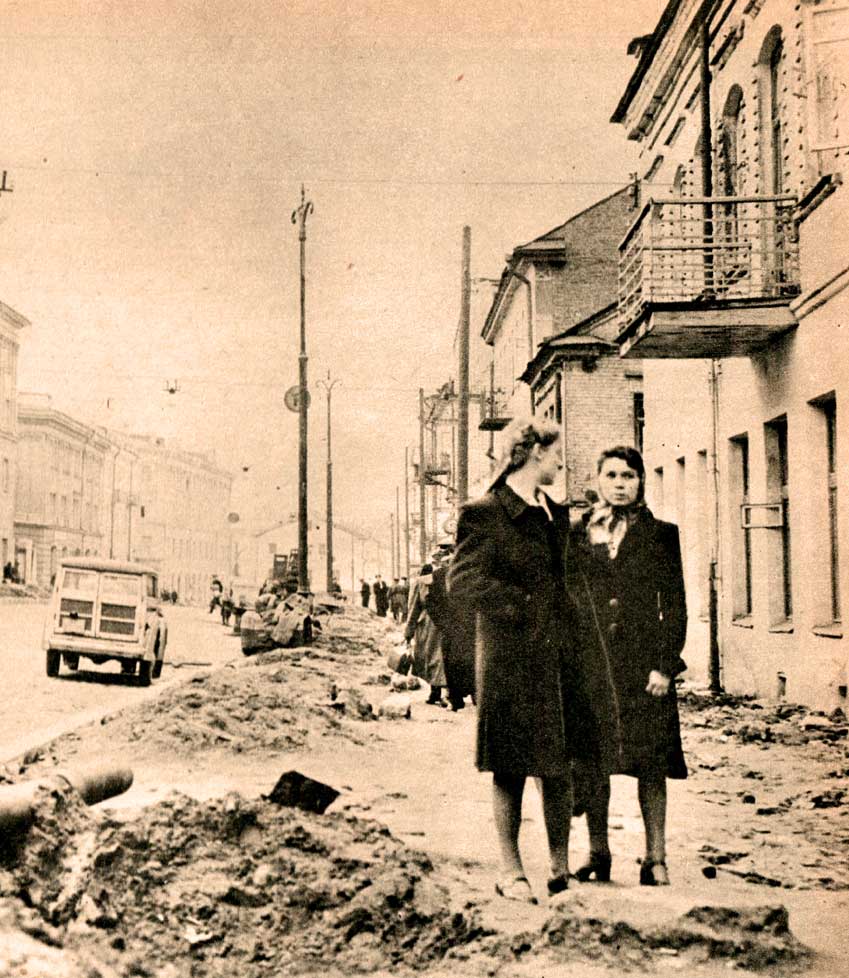 Downtown Minsk - the slow walk back.

Downtown Minsk – the slow walk back.

Continuing the survey of year-ends gone by – here is what December 30th 1955 sounded like. Another set of notches in the Cold War belt, along with the realization that it was ten years since the end of World War 2, and somehow the world didn’t seem very much safer. It was, if anything, more dangerous, more suspicious and more discontent than before the abyss started.

But despite it all, there was the slow rebuilding of shattered cities and shattered lives, ten years on, the process slowly continued.

And while that was going on, the world continued spinning, albeit out of control.

The well-worn phrase “a heartbeat away from the President” had an anxious ring attached to it that year. President Eisenhower suffered his first heart attack, and speculation was rife over what a Nixon Presidency was going to look and sound like. Fortunately, they weren’t going to know that for another thirteen years, as Eisenhower recovered and went back to work.

American POW‘s were still being held in Korea, while German POW’s were finally released by the Russians, ten years after the end of the War. The United Nations was the scene of many crises that year. The Middle East was flaring up. China was getting its fair share of nervous apprehension, with massive military buildups, and the threats towards Formosa becoming almost daily occurrences.

Meanwhile, back in the States – Grace Kelly and Marlon Brando won Best Acting Oscars in 1955. Dr. Jonas Salk unveiled a Polio vaccine and a nationwide campaign got underway to inoculate every child in America. Some cases of Polio developed as a result of the first batch of vaccines was reported, sending a scare throughout the country and a halt of further vaccinations until the cause of the bad batch of serum was discovered and stricter monitoring of the vaccine was assured.  The situation was resolved and the vaccine campaign continued.

Weather played a factor in 1955 – with devastating floods on both the east and west coasts. Nature was still having its way.

Atomic testing was going ahead in Yucca Flat, Nevada, adding to the atmosphere of nerves. The campaign of fear was ramping up with displays of effectiveness of aerial bombing vastly outdistancing what was capable during World War 2. Civil Defense was quick to add that preparation for an enemy attack had vastly improved, but was still woefully inadequate for the West Coast, claiming an attack from Russia would obliterate everything from Seattle to San Diego before adequate warning measures could be taken for the rest of the country. Comforting thought for sunny Southern California, and the reign of sleepless nights would begin in earnest as almost daily demonstrations of simulated atomic attacks took place around the country – each offering dire scenarios of death and destruction if we failed to be in a constant state of readiness.

And that’s only a small sample of what went on in the world, this December 30, 1955 as reported by CBS Radio in their hour-long yearly wrap-up of events: This Was 1955.

And now you know.