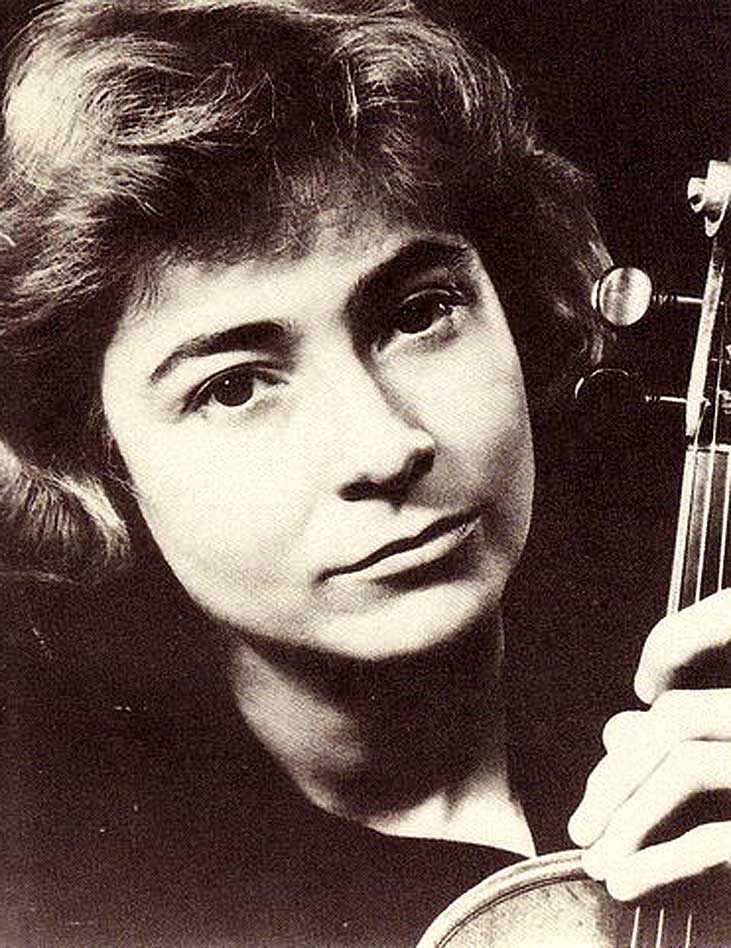 Michele Auclair - one of the bright, shining lights on the musical horizon in 1951.

Michele Auclair – one of the bright, shining lights on the musical horizon in 1951.

Continuing the series of Boston Symphony rehearsal recordings with a broadcast from January 27, 1951 featuring The Boston Symphony, led by Charles Munch and featuring the young French violin sensation Michele Auclair in rehearsals of the Genoveva Overture by Schumann and the Tchaikovsky Violin Concerto. It’s this rehearsal that marks Auclair’s debut in America.

Surprisingly, Charles Munch was much more the grunty and exclamative conductor than either Koussevitsky or Bernstein were, at least if the rehearsal recordings are any judge. Still, Munch was one of the greats and he lead the BSO through a number of historic recordings throughout the 1950s and early 1960s.

Here’s another example of the orchestra at work; one of those rare glimpses which shed an enormous amount of light on the process of putting something together, even when it’s a warhorse like the Tchaikovsky Violin Concerto.

French violinist Michèle Auclair (born on November 16, 1924-2005) studied at the Paris Conservatoire with Jules Boucherit and Jacques Thibaud from France, and with Russian Boris Kamensky. They all influenced the development of her talent and explains her style of playing with a beautiful technique and above all with a natural passion. In 1943 she won the “Prix Jacques Thibaud Marguerite Long” and in 1945 she was a laureate of the “Concours International de Genève”, the Geneva International Competition.

There is mention of a performance by twenty year old Michèle Auclair on Sunday, February 4, 1945, in liberated Paris. She played Mozart’s Concerto in G Major K216 with l’Orchestre de la Société des Concerts du Conservatoire and conductor Charles Münch. This was her first major appearance in public in a concert hall.

In 1943 she was prizewinner of the first Marguerite Long-Jacques Thibaud Competition – Samson François won the prize for piano. Included in the prize was the opportunity to make a record. With the Orchestre de la Société des Concerts du Conservatoire under Thibaud himself, she recorded Haydn’s C Minor Violin Concerto for Pathé. In 1946, the year before Johanna Martzy’s success there, Michèle won the first prize for violin at the Geneva Concours. Thus began the career that would take her across Europe and the Americas.

In 1956 Auclair began an important collaboration and musical friendship with the pianist Jacqueline Bonneau (later Robin), herself a deep and cultured musician. A classmate of Paul Tortelier and Henri Dutilleux in the harmony class at the Conservatoire, Jacqueline Bonneau was a pupil of Lazare Levy. In the disciplines of piano, harmony, music history, fugue and accompaniment she received ‘First Prizes’. She gave her debut concert in 1945. Later that year she formed a two-piano duo with Genevieve Joy, critically regarded as the best in its field for their presentation of contemporary music. Though known primarily as an accompanist, given her years with Elisabeth Schwarzkopf, Irma Kolassi, Gedda, Sciutti, Sénéchal and Pierre Fournier, Bonneau was an accomplished and respected solo performer in her own right.

They gave their first performance in May 1957 at the Comédie des Champs Elysées performing the third of Bach’s accompanied sonatas, Brahms’ third and Bartok’s first. The critics were immediately attracted by this new partnership. ‘Mme Auclair’s bow was by turns warm, violent, harsh or tender, but always personal, especially in the medium and low notes. By her side, Mme Robin showed herself to be an excellent performer.’ The duo was to make but one record together, for Discophiles Français, a 10″ disc featuring the Debussy and Ravel sonatas.

Michèle Auclair also taught at New England Conservatory from 1989 until just before her death. Considered one of the most important violinists on the international scene following WWII, Boston audiences heard her with the BSO in 1959. In the mid-’60s, an automobile accident ended her performing career, but she became one of the Paris Conservatory’s top teachers until reaching their mandatory retirement age.