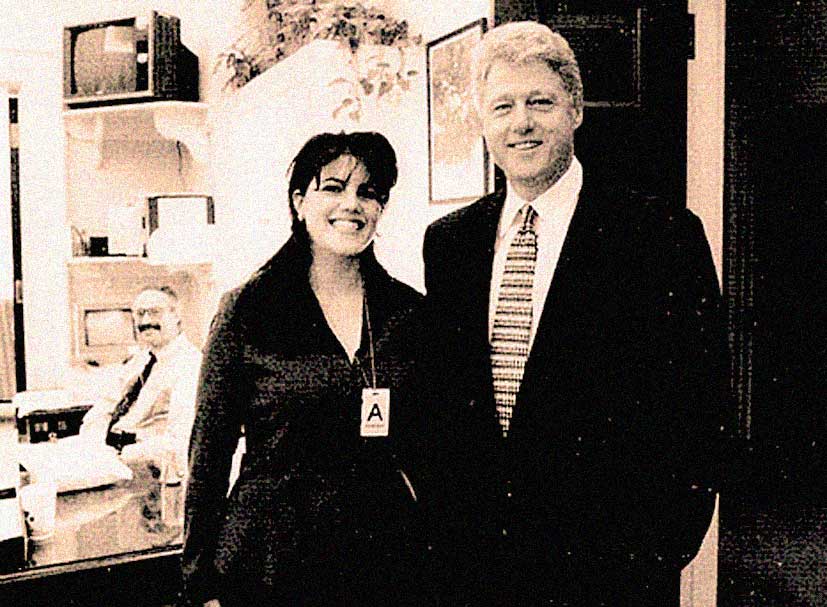 A man's bone is his hassle.

A man’s bone is his hassle.

Gearing up for a second day of political rock-throwing in the Impeachment trial of President Clinton, this January 15th in 1999.

In what was viewed by many as a Republican pay-back for the Great National Nightmare of 1974 known as Watergate and the dismantling of the Nixon White House, the veritable witch-hunt going after President Clinton and his dalliances with White House intern Monica Lewinsky paled by comparison, but blown into heinous proportion by  many on the right side of the aisle, including those who had very little, if any business casting first stones and dispersions of infidelity.

But the drama dragged on and it made for endless fodder on “news” programs, or those wanting a dose of juicy dirt to perk up otherwise drab, wretched lives. Doubtless those who were dealing with yet another arctic blast, plunging the Midwest and East into frigid somnambulance and skidding off icy highways, turning morning commutes into episodes of bumper-cars.

Senator Bill Roth of Delaware was getting to introduce the Retirement Savings Opportunity Act, a variation on the 401k Roth introduced earlier. Many were dubious because the tax advantages proposed by Roth were viewed as a break for the wealthy.

Money was in the picture again this day, as fears of a continued sell-off on Wall Street, resulting in the shaky financial situation in Brazil, had many afraid the downward plunge would continue. The fears hadn’t materialized at the time of this news broadcast however.

And people were wondering how a young witness in a murder case become a murder victim as 8 year-old B.J. Brown was laid to rest on this day. The only witness to a murder, Brown was shot and killed along with his mother. The suspect in the original murder had been re-arrested on suspicion of shooting the mother and son.

And that’s just a small portion of what went on this January 15th in 1999, as reported over CBS Radio’s CBS World News Roundup.