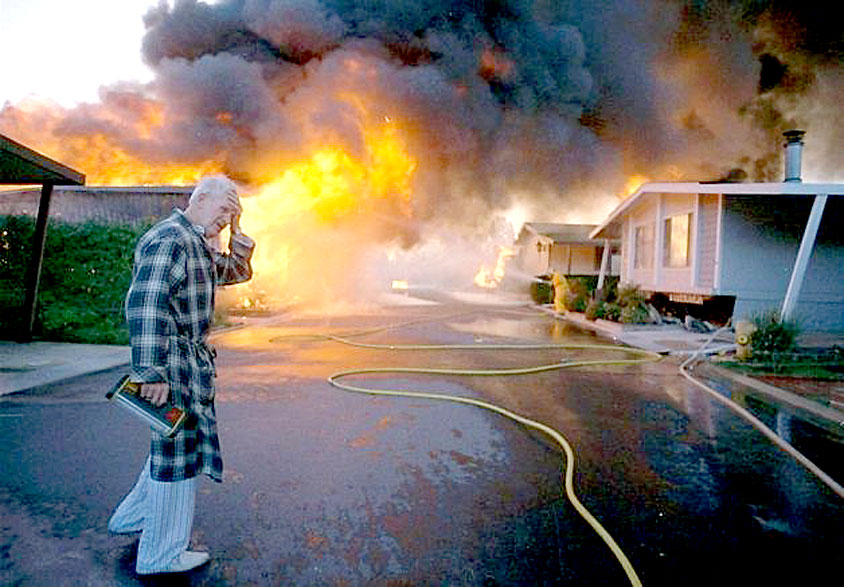 And on top of everything else - broken gas mains.

On this day in 1994 there was no doubt, a lot going on in the rest of the world. But for around 9 million people living in the Los Angeles area, the only thing on peoples minds as windows smashed and glass broke and walls tumbled  was “when is this thing going to stop?”

On this January 17th in 1994, at 4:30 in the morning, L.A. was hit with a devastating 6.6 magnitude earthquake. Centered in Northridge, in the San Fernando Valley, the earthquake was felt over all of Los Angeles, with particular damage throughout the Valley, but also in Santa Monica to the south. Freeways collapsed, apartment buildings crumbled, houses torn off their foundations. And in true Los Angeles fashion – a lot of contrasts. On one side of a street a broken water main would send a geyser of water some 75 feet in the air, while on the other side of the street a broken gas main would send flames shooting in every direction, destroying buildings and adding further catastrophe to an already catastrophic situation.

And there were the aftershocks. After the initial quake, an aftershock would rattle already frayed nerves every few minutes – causing further damage, extending the catastrophe, showering anyone standing with broken glass one more shift at a time. The aftershocks sent people running for open space – setting up makeshift tents in open fields, playgrounds – anywhere not in danger of collapsing. The city had emptied into the streets and would stay that way for a while, or at least until the nerves recovered, the building or house they were living in was safe and not in danger of collapsing and life could slowly be restored.

But some opted permanent escape – as always happens during an earthquake (and L.A. is no stranger to them) it sends a flood of people out of the city, back to parts East or mid-west, away from the sudden mayhem that is just part of Los Angeles.

All in under a minute.

And they say that wasn’t The Big One. But this day in 1994, that was Big One enough for everybody living in L.A. – and twenty years later, they’re still talking about The Big One coming – with news today that Los Angeles is riddled with active fault lines – that we still consider building  high-rises, that we more-or-less nod in agreement that it could all be emptied into the streets once again, all be crumbled once again and all frayed-nerves once again.

And we try not to think about it.

Here is a sampling of January 17th, 1994 as reported by ABC Radio News. Sadly, it was the one day I wasn’t recording anything because the power was down and all my equipment was buried under a mountain of electronic debris. Due to circumstances beyond my control . . . .