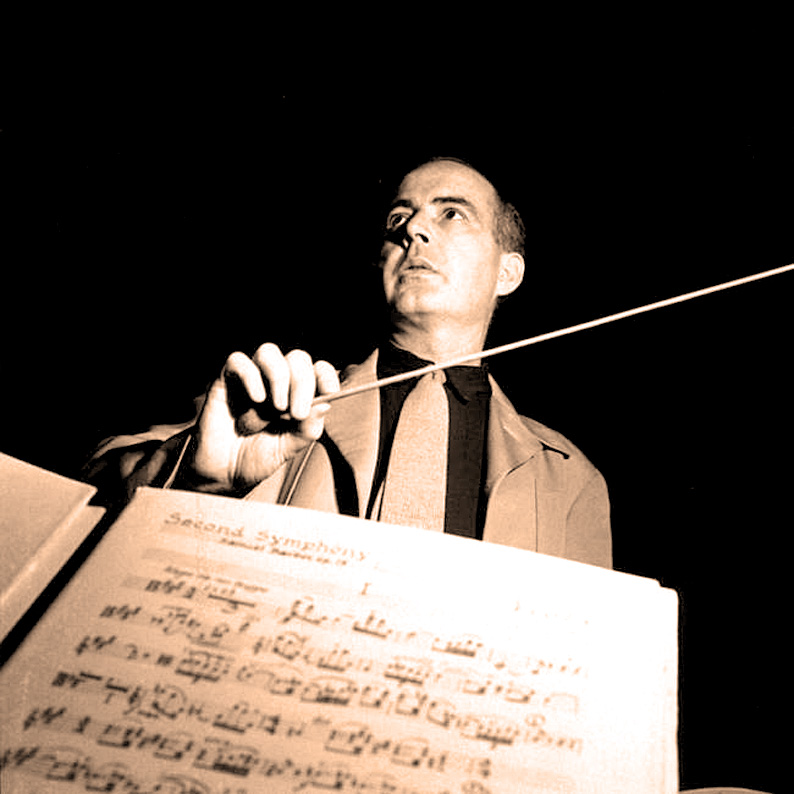 Samuel Barber - another noteworthy American composer of the 1950s leading the BSO this week.

Samuel Barber – another iconic American composer of the 1950s leading the BSO this week.

Continuing our ongoing series of historic rehearsal recordings with The Boston Symphony. This one features the 20th Century American composer Samuel Barber, guest conducting the BSO and leading the orchestra in rehearsals of his own 2nd Symphony. Ironically, it was the 2nd symphony Barber disowned in later years and ordered up all copies of the manuscript to be destroyed.

Barber, considered one of the leading lights in American contemporary Classical music of the late 1940s/1950s, is probably best known for his Adagio for Strings, which has won a permanent place in the repertoire of most orchestras throughout the world, leading some critics to exclaim “no other American composer had enjoyed such early, persistent and long-lasting acclaim”.

Barber wrote his first piece at age 7 and attempted his first opera at age 10. At the age of 14 he entered the Curtis Institute, where he studied voice, piano, and composition. Later, he studied conducting with Fritz Reiner. At Curtis, Barber met Gian Carlo Menotti with whom he would form a lifelong personal and professional relationship. Menotti supplied libretti for Barber’s operas Vanessa (for which Barber won the Pulitzer) and A Hand of Bridge. Barber’s music was championed by a remarkable range of renowned artists, musicians, and conductors including Vladimir Horowitz, John Browning, Martha Graham, Arturo Toscanini, Dmitri Mitropoulos, Jennie Tourel, and Eleanor Steber. His Antony and Cleopatra was commissioned to open the new Metropolitan Opera House at Lincoln Center in 1966. Barber was the recipient of numerous awards and prizes including the American Prix de Rome, two Pulitzers, and election to the American Academy of Arts and Letters. The intensely lyrical Adagio for Strings has become one of his most recognizable and beloved compositions, both in concerts and films (“Platoon,” “The Elephant Man,” “El Norte,” “Lorenzo’s Oil”).

Here is a half-hour excerpt of that rehearsal, as announced by Ben Grauer and broadcast over the NBC Radio Network on June 23, 1951.