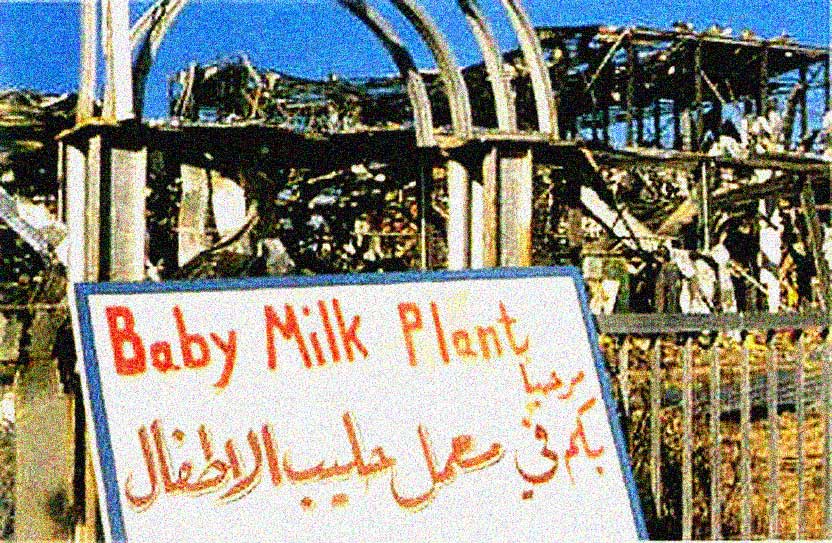 Ranked up there along with "your girlfriends are going out with Bart Simpson".

Ranked up there along with the infamous howler “your girlfriends are going out with Bart Simpson“.

With Desert Storm a week old, this January 23rd, twenty-three years ago, the news was about strange accusations the Iraqis were making with reference to our almost continuous bombing runs. One such claim was that we had attacked a Baby Formula Plant in Baghdad which drew raised Human Rights eyebrows, until it was discovered a hastily scribbled sign had been planted in front of the bombed out facility. Bearing all the markings of a Monty Python sketch (“the word Dog crossed out and the word Cat scribbled in crayon!”), the claims were quickly passed off as just another attempt at really bad Iraqi propaganda. It followed a line of such head-scratchers as the allegations of Baghdad Betty broadcasting to the American troops that their girlfriends back home were dating Bart Simpson. We were starting to wonder just how malignant this bunch were. The jokes were coming thick and fast, and in the fog of war some of the jokes became facts. The sign however, wasn’t.

Nor were the continuing Scud Missile attacks on Tel-Aviv, launched from bases inside Iraq. And those raised real concerns the much-touted Chemical Weapons purported to be in great supply in Iraq would be showered on Israel as retaliation for Allied troops massed on the Saudi-Kuwaiti border.

But we were all cautioned this wasn’t going to be an easy excursion. And even though things seemed to be speeding along, many in the media as well as the Pentagon warned not to get too excited.

And that’s a portion of what went on this January 23rd in 1991 as reported by The CBS World News Roundup, along with updates and a few words from Charles Osgood.