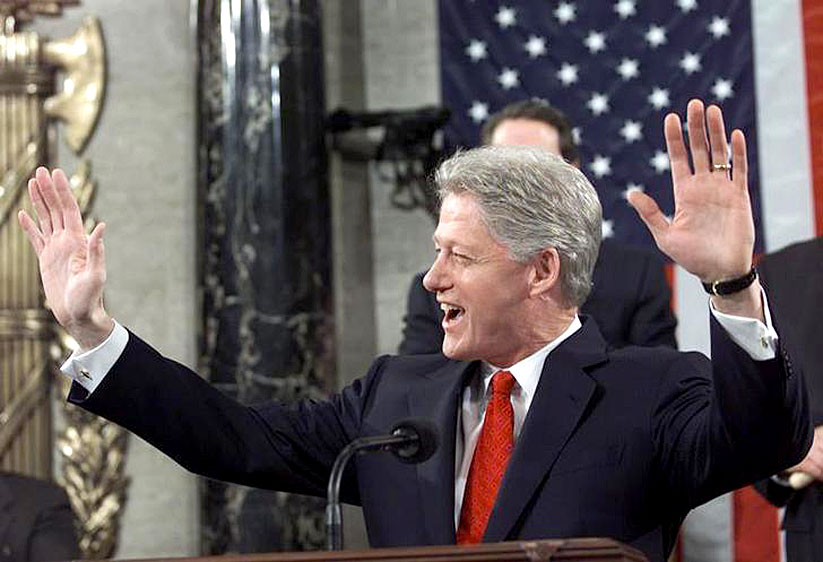 News for this day in 1995, at least in this country, had to do with what the State of the Union was all about. 1994 saw the U.S. take an abrupt veer to the right, with the mid-term elections ushering in the so-called “Contract With America” era, and that new soon-to-be-overused term “New Covenant“.

President Clinton: “When the last Congress killed political reform last year, it was reported in the press that the lobbyists actually stood in the halls of this sacred building and cheered. This year, let’s give the folks at home something to cheer about.

More important, I think we all agree that we have to change the way the government works. Let’s make it smaller, less costly, and smarter; leaner, not meaner. [Applause]

I just told the Speaker the equal time doctrine is alive and well. [Laughter]

Our job here is to expand opportunity, not bureaucracy, to empower people to make the most of their own lives, and to enhance our security here at home and abroad. We must not ask government to do what we should do for ourselves. We should rely on government as a partner to help us to do more for ourselves and for each other.

I hope very much that as we debate these specific and exciting matters, we can go beyond the sterile discussion between the illusion that there is somehow a program for every problem, on the one hand, and the other illusion that the government is a source of every problem we have. Our job is to get rid of yesterday’s government so that our own people can meet today’s and tomorrow’s needs. And we ought to do it together.”

What made much of this State of The Union Address interesting was the level of civility displayed on both sides of the aisle. Sadly, a level of decorum eroded to the point of tantrum ever since.

But on this day it was all smiles and optimism and putting best feet forward.

Here is that State of The Union address, as broadcast by NPR on January 24, 1995.