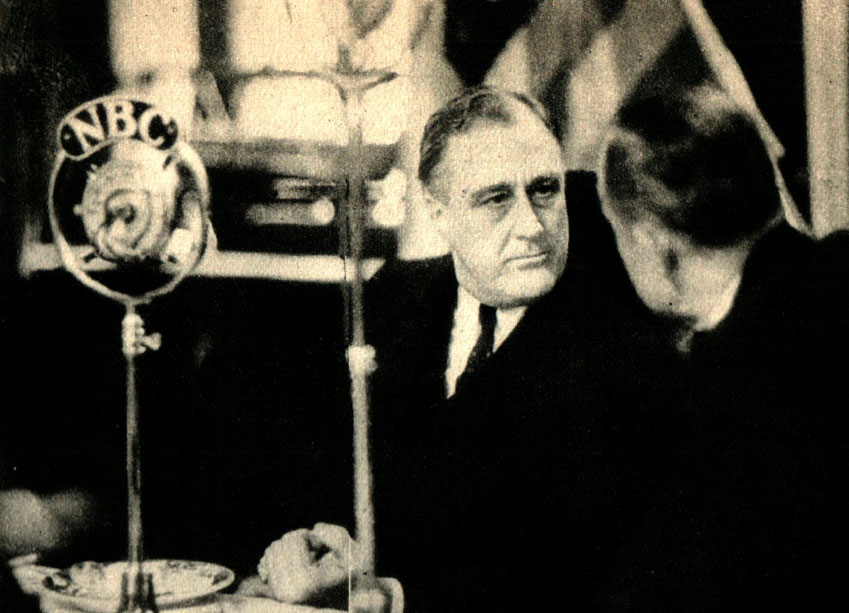 Lest we all forget, today is President Franklin D. Roosevelt’s birthday, born January 30, 1882.

In 1936 it was a national celebration, and parties were held all over the country to commemorate the occasion.

And it was a media event. The combined radio networks carried a one-hour special program throughout the country, with live broadcasts from coast to coast and a message of thanks from the President. Bear in mind, this was 1936 and network radio was still pretty new at the time and technological advances were such that being able to hear a broadcast from New York, Washington D.C. and Los Angeles at the same time was an exciting event to witness. And since President Roosevelt was the first to take advantage of this new media, it was only natural that the magic of radio would be on hand to help him blow out the candles on  his birthday cake.

President Roosevelt: Tonight, on my fifty-fourth anniversary, I am very happy because Colonel Doherty, Carl Byoir and Keith Morgan tell me that their reports indicate that this year’s celebration, in the interest of continued efforts against infantile paralysis, will exceed our fondest hopes of success. Tonight in every State and in every outlying territory of our Nation many millions of people are enjoying themselves at all kinds of local parties. They have resolutely aligned themselves to carry on the fight against infantile paralysis until this dread and costly disease is brought under definite and final control.

Ten years ago it was made possible for me, with the support of many personal friends, to start the work of the Warm Springs Foundation in Georgia and I dedicated it to one purpose–to apply itself to the task and to keep everlastingly on the job, not by itself alone but with the cooperation of the doctors, the orthopedic hospitals and those thousands of individuals on whose shoulders falls the brunt of caring for several hundred thousands of the afflicted.”

Here is that one hour broadcast as it was heard all over the country on January 30, 1936.