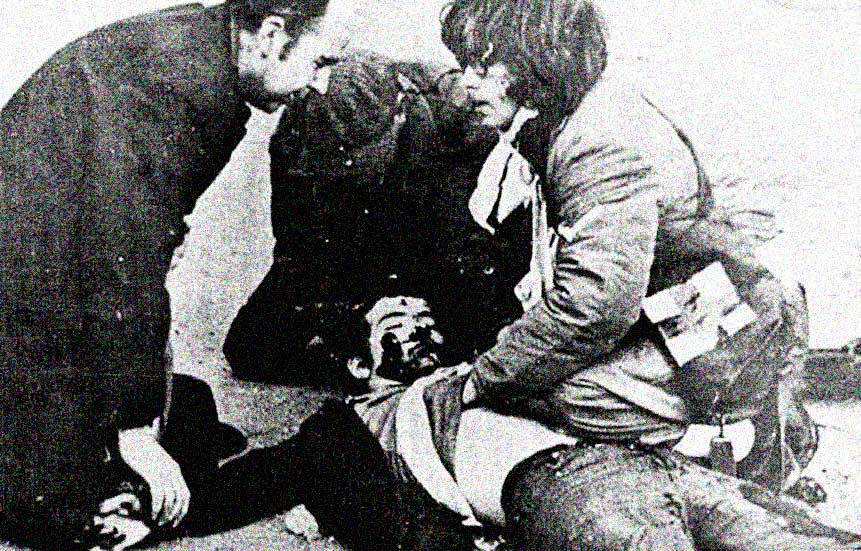 Straining to find a shred of sense . . . anywhere.

Straining to find a shred of sense . . . anywhere.

News for this day in 1972 began with reports from Northern Ireland of deadly force used against demonstrators by British Army Paratroopers, killing 13 civilians and wounding some 14 others. It would go down as the single worst day of violence in the besieged town of Derry and brought about calls for revenge by members of the outlawed Irish Republican Army. In what began as a peaceful demonstration organized by the Northern Ireland Civil Rights Association quickly spiraled out of control amid conflicting reports that the army was brought in to prevent the demonstrators from marching on Guildhall. That the Army claimed shots were fired from a suspected IRA sniper. The demonstrators claimed no such sniper was present and that the Army fired randomly, and several demonstrators were shot in the back while fleeing the Army presence. At the end of the day, there were still 13 dead, many wounded and another blood-stained chapter in the history book of troubles in the beleaguered region.

But all was not so violent on the other side of the Atlantic. On this particular January 30th in 1972 things were gearing up for the Presidential election. And Arizona was designated to be the first state to elect a delegation to the Democratic National Convention for later that year. The election of delegates held a few surprises. Aside from the majority of delegates voting for Presidential-hopeful front-runner Edmund Muskie with 189 delegates, but a number of delegates pledged themselves to New York Mayor John Lindsey, making him second, while George McGovern came in third. It was shaping up to becoming a horse race on the way to Miami.

Regarding the on-going Howard Hughes autobiography mystery – Time Magazine reported that Clifford Irving, who wrote the book, might have gotten all his information from a secret computer print-out, prepared for use by Howard Hughes, and containing everything ever written by, or about the Billionaire.

And it was a week away from the opening of the 1972 Winter Olympics in Sopporo, Japan. And even then, there was controversy over professional versus amateur skiers.  Always something.

And that’s just a sample of what happened on this January 30, 1972, as reported by NBC Nightly News.