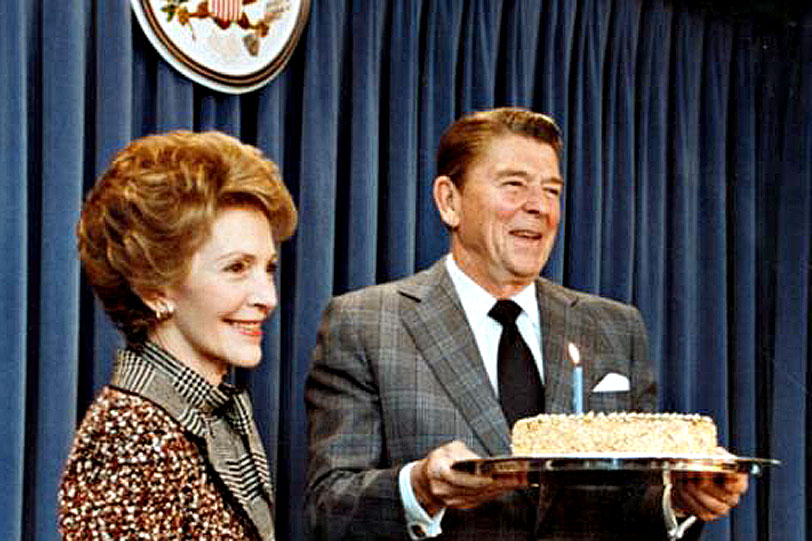 Two days early, but it seemed like as good an excuse as any.

Jumping The Gun On Birthdays – Open Season On Truckers – February 4, 1983

Two days early, but it seemed like as good an excuse as any.

This February 4th in 1983 started off with a surprise birthday party in the midst of a Presidential Press conference. Two days ahead of schedule (President Reagan was born on the 6th of February), it nonetheless turned a routine press conference where matters of unemployment, the economy and the umpteenth set of talks about nuclear disarmament slated to begin in Geneva got temporarily sidetracked with birthday wishes and a jovial press corps.

And while that was going on, the Truckers Strike was taking a turn for the violent, as reports of sniper attacks on trucks, which were taking place to the tune of over 500 since the previous Monday, had at least the threat of using the Pennsylvania National Guard to enforce peace by Governor Dick Thornburgh. One Interstate in Pennsylvania was dubbed “the combat zone”, with reports of three truckers being wounded by sniper attacks in one day alone.

Meanwhile, Japan was beaming over the successful launch of their first communications satellite, while government officials expressed anger over American charges the Japanese were dominating the market in computer memory parts, owing to Tokyo‘s subsidy of their electronics industry. The Diet giveth – The Diet taketh away.

And there was that incident earlier in the week where a U.S. Marine Captain blocked the movement of Israeli tanks in Lebanon. Israel thought the U.S. should apologize. But President Reagan said Marine Captain Johnson had “done the right thing”.

And so went another day of contrasts on Planet Earth, this February 6th in 1983, as presented by CBS Radio and the 9:00 am news with Richard C. Hottelet.